Home Politics William Barr will testify about the Mueller report this week. Here’s what... 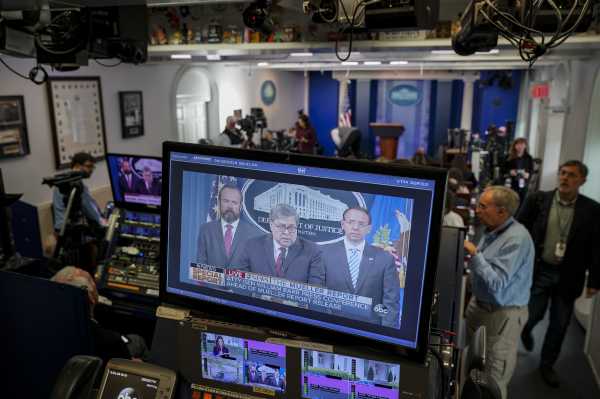 Attorney General William Barr has a busy week ahead of him. He’s supposed to testify at back-to-back hearings in Congress about special counsel Robert Mueller’s Russia investigation and report.

On Wednesday, May 1, Barr will appear before the Republican-led Senate Judiciary Committee. He’s then supposed to return to Congress on Thursday to testify before the Democratic-led House Judiciary Committee, though he’s threatened not to show up to this hearing over objections to the committee’s proposed interview format.

This is the first time the attorney general will face direct questioning from lawmakers after the release of the Mueller report earlier this month.

Republicans in the Senate and House are likely to support Barr in his decision to clear President Donald Trump of obstruction of justice. They’re also likely to hone in on the origins of the investigation, specifically whether the FBI or other law enforcement officials acted improperly when they launched the Trump-Russia probe in July 2016.

Democrats, meanwhile, are likely to press Barr on his supervision of the investigation, and (among other things) his decision to publish a four-page letter that outlined the investigation’s “principal conclusions” and quoted selectively from Mueller’s written report. Barr chose to clear Trump of criminal obstruction of justice in that letter, though the public or Congress had not yet seen Mueller’s fuller, detailed report, and the 448-page document offered a far more complicated analysis of Trump’s actions.

Here’s how to watch the two hearings, and what you need to know before you do.

Barr’s Senate testimony on Wednesday, May 1

Judiciary Committee Chair Lindsey Graham (R-SC), one of President Donald Trump’s top defenders of late, has made clear that he wants to move past the special counsel probe, the Mueller report, and any questions of wrongdoing on the part of the president.

“I’m not going to relitigate it,” Graham told CBS’s Margaret Brennan on Face the Nation Sunday. “I don’t know how clear I can be, Margaret. It’s over for me. He didn’t collude with the Russians, obstruction of justice in this situation is absurd. I fought hard as hell to make sure Mueller could do his job, I introduced legislation to make sure he couldn’t be fired. It’s over.”

Graham did tell Brennan that he would examine Barr’s four-page summary. “Does the report support his summary? Does the report actually indicate there was no collusion between the Trump campaign and the Russians?” Graham said, adding that he thought the obstruction of justice question “absurd.”

But Graham and his fellow Republicans don’t really want to dwell on the Mueller report’s conclusions. As Vox’s Li Zhou wrote, “Senate Republicans are trying to shift the attention to other investigations of the 2016 campaign.”

Republicans have long questioned the surveillance of the Trump campaign, and have argued that bias at the FBI prompted the Foreign Intelligence Surveillance Act (FISA) warrant on Carter Page, a former Trump campaign official who traveled to Moscow in the summer of 2016.

Barr gave ammunition to this GOP complaint after he told Congress in earlier in April he would review “both the genesis and the conduct of intelligence activities directed at the Trump campaign during 2016.”

Another thing to watch for in the Senate hearing: the Judiciary Committee is packed with 2020 Democratic hopefuls, including Cory Booker (D-NJ), Kamala Harris (D-CA) and Amy Klobuchar (D-MN). This will be one of the most high-profile hearings since they’ve all joined the race, and they’ll likely use this opportunity to go hard on Barr, and Trump.

The Senate Judiciary Committee hearing starts at 10 am Eastern time on Wednesday, May 1. Watch live at C-Span or at this link.

Barr’s House testimony on Thursday, May 2

The attorney general is scheduled to testify again on Thursday, but his attendance at the Democratic-led House Judiciary Committee hearing on Thursday is still in question.

The reason why is that Barr has reportedly objected to the format of the questioning proposed by House Judiciary Chair Jerold Nadler (D-NY). CNN reported that Nadler would allot the traditional five minutes for House members to interview Barr, but also wanted to tack on an additional 30 minutes for committee counsels for both Democrats and Republicans to question Barr directly.

Nadler’s proposal to allow committee lawyers to question Barr is unusual — but the committee chair also has the discretion to set the agenda and format for specific hearings.

Justice Department spokesperson Kerri Kupec told reporters Sunday that Barr had agreed to appear before Congress, and therefore, she said, “members of Congress should be the ones doing the questioning.”

Nadler then scheduled a committee vote on Wednesday to decide whether it wants to proceed with questions from the committee’s Democratic and GOP counsels. Since Democrats have the majority, it’s likely to pass.

Nadler also indicated he’d move ahead with the hearing with or without Barr on Thursday, and that he would subpoena the attorney general if he didn’t show.

“It’s not the business of a witness to try to dictate to a congressional committee what our procedures for questioning him are,” Nadler told reporters on Monday.

This showdown with Barr is part of a larger battle between House Democrats and the Trump administration, which is fighting any and all document requests and subpoenas the House majority is sending its way. Democrats say the White House is thwarting Congress’s legitimate oversight responsibilities, while the White House sees this as a continuation of a partisan witch hunt.

Democrats also subpoenaed the full, unredacted Mueller report, and set the deadline for May 1. They’re currently in discussions with the Justice Department over access to the document.

House Democrats are still very torn over the Mueller report and whether to pursue impeachment proceedings against the president. They tend to see Barr’s testimony, access to the full Mueller report, and interviews with other witnesses, including former White House counsel Don McGahn, as critical steps before any impeachment talk begins in earnest.

Democrats have also been extremely critical of Barr’s handling of the Mueller probe, particularly his decision to step in and determine that Trump did not obstruct justice in his initial letter to Congress summarizing the probe’s “principal conclusions,” which was released weeks before the 448-page report was made public. They’ll likely be pressing the attorney general on that, and a slew of other findings from the full report, especially Volume II, which discusses Trump’s actions toward the Russia investigation.

If Barr shows up, that is.

The House Judiciary Committee hearing starts at 9 am Eastern time on Thursday, May 2. Watch live at this link.

Serbian Neuropsychiatrist on COVID-19: During Yugoslavia Bombings At Least We Knew...