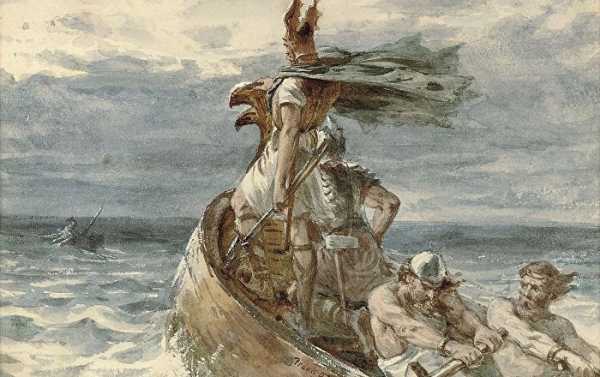 Archaeologists are particularly drawn to the Newark Bay cemetery on the Orkney Islands as possibly holding the key to the mystery surrounding the relationship between the Picts and the Norse on the islands – an issue that has been debated among scholars for years.

A spate of storms lashing the Orkney Islands in the far north of Scotland have unearthed a fascinating discovery recently, while also placing it at risk, reports LiveScience.

According to the Orkney Research Centre for Archaeology (ORCA), Pictish and Viking remains have been discovered at the ancient Newark Bay cemetery dating to almost 1,500 years ago on Orkney’s largest island. However, storm-generated waves are now eating away at the low cliff near the site.

The ancient human remains revealed by the storms will be removed to a safe location, say experts, as local volunteers aid staff and students from the University of the Highlands and Islands in placing sandbags and piling clay to prevent further flooding of the site.

The cemetery is located on the coastal site of Newark Bay and has been known to archaeologists for some time, with 250 skeletons removed from the site for studies some 50 years ago. It is yet to be determined just how far the graveyard extends back from the beach, according to Pete Higgins. Hundreds of Pictish and Norse bodies are thought to be buried at the site.

The cemetery was in use from at least 550 to 1450 A.D., covering two principal periods of habitation on Orkney.

Initially, it was populated by the Picts – a confederation of tribes that once dominated northern Scotland. At a later period, it was taken over by Norse Vikings, who started colonising Orkney in the eighth century.

Around 200 people dressed as Vikings simulate a battle during the Viking Festival at Trelleborg, the Viking fortress of King Harald Bluetooth from around year 980 ad, near Slagelse, south-west of Copenhagen, on Friday July 17, 2015

In the 1960s and 1970s, the ancient cemetery at Newark Bay was excavated by British archaeologist Don Brothwell, who preserved the skeletons for future study, using methods current for those times. However, says Higgins, “the archive isn’t quite the way we’d have it nowadays.”

Experts are hoping to preserve the ancient remains until they can be studied over the next three years in HES-funded research.

The ancient bones that have been revealed at the cemetery are yet to be determined as belonging to either the Picts or the Vikings.

The mystery persists as no burial objects or funeral clothing have been found.

According to historians, the first Norse visitors to the Orkney Islands settled there in the late eighth century, using the Orkney Islands as a base from where they led their Viking raids. Eventually, all of Orkney was dominated by the Norse, they claim, as this region of the British Isles remains most influenced by Norse culture.

However, it is the relationship between the Picts and the Norse on the Orkney Islands that is the subject of heated debate among experts.

Scholars have been puzzling over whether the Norse took over the area by force, or settled and intermarried with the Picts.
The ancient cemetery at Newark Bay possibly holds the key to this riddle, claims Higgins.

In future research involving the remains, testing of genetic material will be carried out. The results are touted as likely to reveal that some people currently inhabiting Orkney are descended from those ancient people who lived on the islands over 1,000 years ago.