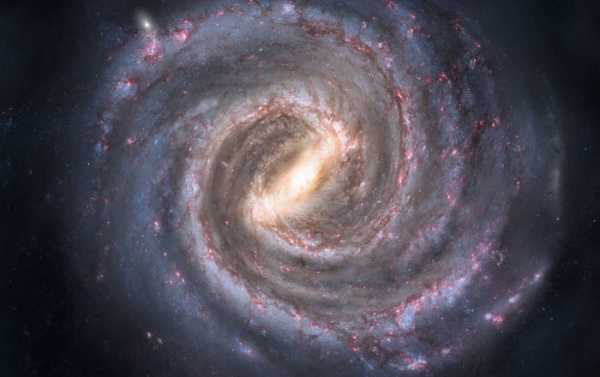 The disc of the Milky Way galaxy, a well-known image, is some 260,000 light years across, although much of the actual diameter of our home galaxy is made up of unobservable dark matter, only detectable through observations made of gravitational effects on surrounding objects.

The size of the Milky Way galaxy has been extended by an additional 1.9 million light years across, but most of it is dark matter, a Durham University paper has revealed.

Astrophysicist Alis Deason, who submitted the research to the Monthly Notices of the Royal Astronomical Society and later uploaded it to arXiv, lead the Durham team aiming to see how far the invisible ‘dark’ matter extended beyond the visible portion of our galaxy’s iconic disk.

The team of astronomers calculated the true size of our galaxy by observing the gravitational pull of neighbouring smaller galaxies.

The galactic disc of the Milky Way, consisting of stars, black holes, planets, moons and other cosmic objects, is thought to be 260,000 light-years across.

UGC 7321 starlight: Colour image of the starlight emitted by a nearby spiral galaxy called UGC 7321. Stars in this galaxy lie in a disc, similar to that of our Galaxy, the Milky Way. We see this disc nearly perfectly edge-on. Other sources in the image are foreground or background objects (galaxies and stars), unrelated to galaxy UGC 7321.

The remainder of the galaxy is thought to be a ‘dark matter’ halo, an outer boundary layer covering the Milky Way which cannot be directly observed, only inferred through measurements upon observable celestial objects.

Astronomers realised that the stars just outside the edge of the disc move faster than they should only if detectable matter is present, also noting that there is a visible drop off in interactions toward the edge, indicating the way dark matter interacts with objects around it.

Using digital simulations, ‘dark halos’ of other Milky Way-sized galaxies were virtually projected alongside smaller objects in a variety of test runs, creating an imitation of the local group of galaxies, which includes the Milky Way and Andromeda clusters of which we are a part and stretches 9.8 million light years across.

The team gave particular attention to Andromeda, a galaxy which the Milky Way is set to collide with in some 4.5 billion years and is already being effected by gravitational interactions.

The simulations allowed observations of how the Milky Way’s dark matter surroundings would interact with other peripheral objects, matching them to existing observations of nearby dwarf galaxies and confirming the sudden drop in radial velocity and allowing them to work out the entire diameter of the dwarf galaxy as some 950,000 light-years.

In order to determine the actual size of the Milky Way, astronomers then doubled the figure to work out the diameter of the dark matter halo and added it to the galaxies full diameter – 1.9 million light-years.

Dark matter is said to make up around 27 percent of the known universe, yet dark matter has not been empirically studied, only observed by analysing the impact its gravity has on other objects.

Scientists Discover World’s Most Distant Blazar With Its Beam Aimed at...

Johnny Depp Attends Day 1 of Libel Trial Against The Sun...