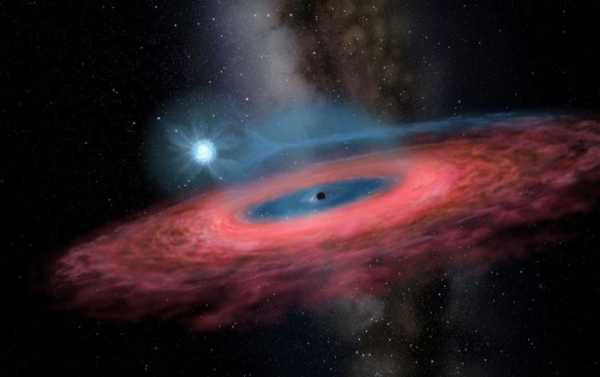 Located in our galaxy about 10,000 light years from Earth, the black hole, which was formed by the decimation of a massive star, and the stellar companion orbiting it, make up a system called MAXI J1820+070.

A team of astronomers have caught a black hole releasing a vivid-hot flare-up into space at close to the speed of light.

In a paper describing the study, entitled “Relativistic X-ray jets from the black hole X-ray binary MAXI J1820+070” and led by Mathilde Espinasse of the Université de Paris, the scientists detail how the process was captured in footage from NASA’s Chandra X-ray Observatory.

​Published in the latest edition of The Astrophysical Journal Letters, the research says new footage of the black hole’s pattern of behavior is based on four observations at the observatory, carried out in November 2018 and February, May, and June of 2019.

The black hole and its accompanying star are situated in our galaxy some 10,000 light years away from Earth, forming a system dubbed MAXI J1820+070.

The black hole under observation is what is referred to as a stellar-mass black hole, boasting a mass some eight times that of the sun, in contrast to supermassive black holes, containing millions or billions of times the mass of the Sun.

The black hole’s powerful gravity pulls material away from the companion star, which has about half the mass of the Sun, into an X-ray emitting gas disk surrounding the hole, with a part of the gas falling into the black hole, while some of it is blasted away in jets.

These pairs of short beams of material are pointed in opposite directions and launched from outside the “event horizon”, along magnetic field lines, says the research.

In the footage, the main panel of the graphic is a large optical and infrared image of the Milky Way galaxy, taken by the PanSTARRS optical telescope in Hawaii.

Marked by a cross is the location of MAXI J1820+070 above the plane of the galaxy.

​An inset shows a video, cycling through the four Chandra observations, with “day 0” corresponding to the first observation on 13 November, 2018, about four months after the launch of the outburst.

In the middle of the image, MAXI J1820+070 is the bright X-ray source, with sources of X-rays visible moving away in jet spurts, north and south, from the black hole.

As to the speed of the jets of material moving away from the black hole, according to the scientists, from Earth’s perspective, it looks as if the northern jet is moving at 60 percent the speed of light, while the southern one is traveling at 160 percent of light speed.

The latter is a phenomenon called superluminal motion, which is registered when something travels towards us near the speed of light, along a direction close to our line of sight.

Researchers estimate some 400 million billion pounds of material was ejected from the black hole in the two jets launched in July 2018.
X-rays from stellar-mass black holes have only twice offered samples of similar high-speed outbursts.

MAXI J1820+070 was observed at radio wavelengths by a team of researchers, led by Joe Bright from the University of Oxford. Bright earlier reported detection of superluminal motion of compact sources based on radio data from the launch of the jets on 7 July 2018 to the end of 2018.

Further observations of MAXI J1820+070 and systems like it are anticipated to offer more compelling data about the jets released by stellar-mass black holes, and the release of energy once the jets interact with their surroundings.