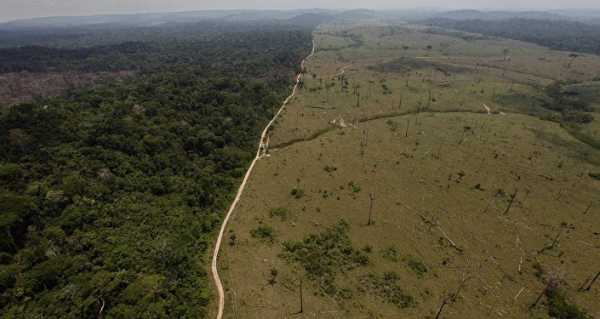 The study conducted by Professor Mauro Bologna of the Department of Electronic Engineering at the University of Tarapacá in Chile and Dr Gerardo Aquino, a research associate at the Alan Turing Institute in London modelled current rates of deforestation and population growth.

Humanity has less than a 10 percent chance of avoiding a collapse of civilisation, claims new research, published in the journal Scientific Reports. According to the study, the rampant consumption of natural resources is driving the human race toward a catastrophe. The authors of the report created a model, which estimated that with the current rate of deforestation there will be no forests in approximately 100-200 years.

There were 60 million square kilometres of forest on Earth before the development of human civilisation, the new paper says that there are now only 40 million square kilometres of forest. Current population growth coupled with the rate humanity consumes the resources we have means that only two to four decades are left before the “irreversible collapse of our civilisation”, the research study points, out adding there is less than a 10 percent chance that civilisation itself survives.

Is it the End?

The model created by Dr Aquino and Professor Bologna took into account current conditions and extrapolated them in the future. The situation with deforestation seems to have started improving in the past few years, though the numbers don’t mean that we’ve turned off the road leading to ecological catastrophe.

According to the report published by the United Nations Food & Agricultural Organization (FAO) with UN Environment Programme, the rate of deforestation has been declining for the past several decades from 7.8 million hectares per year to 4.7. In addition, new forests have been created naturally and artificially.

But in global terms, the area of forests has been decreasing. The UN report says 178 million hectares (an area about the size of Libya) of forests were cut between 1990 and 2020.

The authors of the new study also looked at whether our technological growth will enable us to prevent an environmental collapse or rebuild civilisation in an “extra-terrestrial space” (on another planet). The answer is disappointing. Chances are slim. Moreover, the study suggests that intelligent civilisations tend to end up destroyed due to overconsumption long before they develop capabilities to become advanced and enduring.

“Consumption of the planetary resources may be not perceived as strongly as a mortal danger for the human civilisation” because it is “driven by the economy”, read the study. According to its authors, a new model of society should be created “that in some way privileges the interest of the ecosystem above the individual interest of its components, but eventually in accordance with the overall communal interest”.

Six Dead After a Mysterious Gas Leak in Karachi, Pakistan –...

Insurers get into care, but is it good for your health?