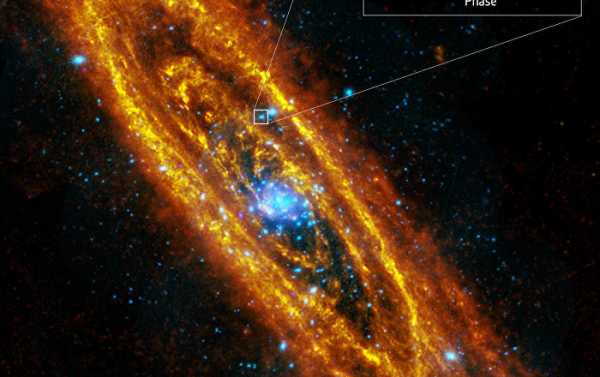 What’s known as quark matter allegedly emerged moments after the Big Bang and held on for microseconds thereafter, but it appears some massive neutron stars could be harbouring it, too.

Neutron stars, the smallest and most dense stars in the universe emerging from a supernova explosion, have been found to hide truly exotic structures – quark matter, a phenomenal result of nuclear matter collapsing in the star’s core, a study published by Finnish scientists in the journal Nature Physics suggests.

Packed into a dense, small sphere only 10 to 20 kilometres (6.2 to 12.4 miles) across, neutron stars are incredibly heavy, averaging about 1.1 and 2.3 solar masses, and it has been extremely difficult to find out what’s hidden inside.

A Giant Hubble Mosaic of the Crab Nebula

However, the scientists managed to produce calculations based on an unparalleled event from 2017 – the collision codenamed GW170817, in which two stars changed as they approached each other close enough to gravitationally deform each other.

Having used that gravitational wave signal along with new theoretical and particle physics results, Vuorinen and his team came to believe that neutron stars towards the upper mass limit of such objects – at least 2 solar masses – show characteristics that indicate the presence of a huge quark matter core, more than half the neutron star’s entire diameter.

“In short, the behaviour of dense nuclear matter would then need to be truly peculiar. For instance, the speed of sound would need to reach almost that of light”, Vuorinen exemplified.

Along with being stunning just as such, the discovery of quark matter hidden in the very core of neutron stars promises to help astrophysicists to learn more about the dawn of our universe.

Cosmologists believe that, for a few brief moments just after the Big Bang known as “the quark epoch”, the universe was filled with a hot soup of quark-gluon plasma that rapidly coalesced into hadrons, another type of elementary particles.

The amazing true socialist miracle of the Alaska Permanent Fund