Home Science & Health Stop the World and Melt With You: Scientists Predict Dying Sun Will... 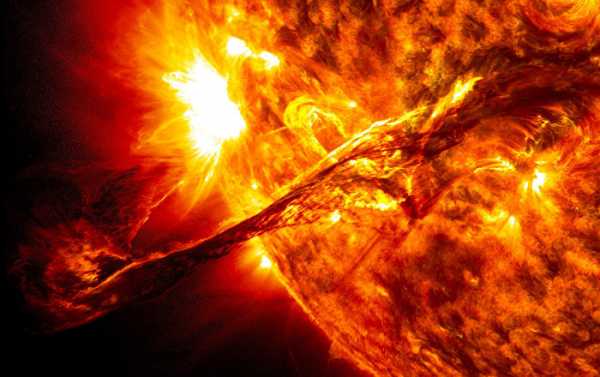 Scientists have made a new attempt to blow the lid off what turmoil, if any, awaits our solar system after the Sun reaches the end of its existence in approximately 10 billion years, which is a little over twice as long as it has already been around.

According to research published in the scientific journal Nature Astronomy, the Sun, which increases in temperature markedly every billion years, will indeed melt into a planetary nebula, like it was previously assumed.

Before that, however, the aging star is forecast to turn into a red giant, with the core of it crumpling and shrinking, while its outer layers will exponentially grow to engulf our planet along the way, if it hasn’t ceased to exist by then. The latter is a highly realistic scenario, since the 10 percent growth in brightness that the Sun witnesses every billion years immediately corresponds to oceans, eventually, evaporating at a frightening speed, as well as Earth’s surface overheating.

Separately, an international team of astronomers has used top-notch computer modelling techniques to determine that our Sun’s fate will mirror that of 90 percent of other stars: it will supposedly shrink down from a red giant to become a white dwarf and subsequently end up as a planetary nebula, something that humans stand little chance of witnessing.

“When a star dies it ejects a mass of gas and dust — known as its envelope — into space. The envelope can be as much as half the star’s mass. This reveals the star’s core, which by this point in the star’s life is running out of fuel, eventually turning off and before finally dying,” commented astrophysicist Albert Zijlstra from the University of Manchester in the UK, one of the authors of the new study.

Interestingly, the envelope at the time shines bright enough to make the dying star observable, although not for long – for maximum 10,000 years, which is quite brief from the standpoint of astronomy. The commonly visible Nebulae, which were called ‘planetary’ long ago due to its resemblance in shape to planets, include the Helix Nebula, the Cat’s Eye Nebula, the Ring Nebula and the Bubble Nebula.

Our Sun, which is technically known as a yellow dwarf, is 4.6 billion years old. While it may last another 10 billion years, red dwarfs such as the heart of the seven-planet Trappist-1 system, discovered in February 2017, burn at lower temperatures and can last for trillions of years.

US Open day one: Novak Djokovic and Roger Federer safely through

Pentagon: US Will Formally Submit Notice to Withdraw From Open Skies...