Home Science & Health The maker of OxyContin tried to make it harder to misuse. It... 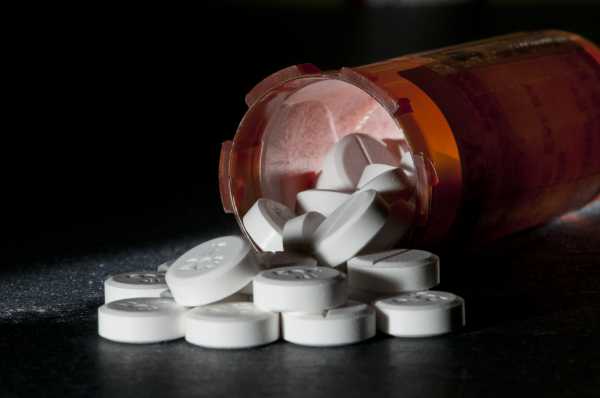 Sometimes things don’t work out as planned. According to a new study, this is one of the key lessons of the opioid crisis.

By now, the story of the opioid epidemic is well-known: In the 1990s, drug manufacturers marketed opioids aggressively — particularly Purdue Pharma with the newly released OxyContin, which the company suggested was safer and less prone to misuse than other opioids.

This contributed to an explosion in opioid prescriptions, which led to more misuse of the drug — and by getting people addicted to opioids, led to greater use of other opioids like heroin and illicit fentanyl. Today, the country is mired in its deadliest drug overdose crisis ever, with tens of thousands dying as a result of drug misuse and addiction every year.

One of the key reasons Purdue was able to market its product as safer was based on a seeming miscalculation in how people would use its drug. OxyContin was characterized as an “extended-release” product — the opioids were supposed to be released into a person’s system over the course of 12 hours after the pill was taken. This, in theory, was supposed to make OxyContin less prone to misuse, since the opioid dose in the pill would take effect slowly.

But people found a way around this. By crushing the pill to snort it or liquefying it to inject it, they could take the entire opioid dose in an OxyContin pill practically instantly. The drug became lucrative for people addicted to opioids, offering a legal avenue to getting high.

How to stop the deadliest drug overdose crisis in American history

In 2010, Purdue tried to put an end to this by replacing the old OxyContin with an “abuse-deterrent” formula. When this new pill is crushed, it turns into a gummy-like substance, making it more difficult to snort or inject. This did not eliminate the possibility of misuse — the pill can still be used to get high by ingesting it orally, and there are ways around the reformulation to keep ingesting it by other means. But it did make the process of misusing it a bit harder.

A new working paper, from researchers William Evans, Ethan Lieber, and Patrick Power, suggests that this really might have made OxyContin less prone to misuse — but with a deadly side-effect: As people decided OxyContin was too much of a hassle, some former OxyContin users moved on to heroin. The subsequent rise in heroin overdose deaths may have been enough, the researchers argued, to match or even outweigh any good that the reformulation of OxyContin did in terms of preventing painkiller overdose deaths — at least in the short term.

A drug policy expert not involved with the study cautioned that the findings do not mean that the reformulation of OxyContin (or other extended-release opioids) was a bad idea — it did, after all, appear to make an addictive drug less prone to misuse. But the new research suggests that when it comes to tackling the opioid crisis, simply cutting back on the misuse of opioid painkillers is not enough.

What the study found

The study, which has not been peer reviewed yet, used economic models to measure trends in opioid overdose deaths — breaking them down to focus on heroin — to see what happened after the OxyContin reformulation was introduced in 2010.

The paper concluded that there was a break in the trends starting on August 2010, when the reformulation was introduced. Most importantly, heroin overdose deaths began to rise more quickly after that month. 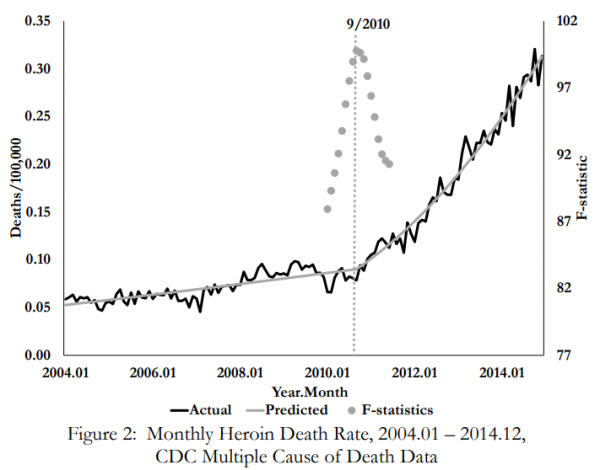 “The hope was reformulation would make it harder to abuse, so at the very least we would stop the growth of deaths from opioids,” Lieber, one of the study authors, told me. “But instead of really seeing that happen, it looks like a lot of people have switched over to heroin and other drugs. And because heroin is particularly dangerous, the actual opioid death rate — if you include heroin in there — hasn’t really been affected by the reformulation.”

There were other signs that the reformulation had made an impact, according to the paper: “A number of national time series including shipments of oxycodone (a proxy for consumption), prescriptions for oxycodone, the fraction of people that use pain medicine recreationally, and health care encounters for heroin poisonings all show a trend break in August, 2010 or immediately thereafter.” 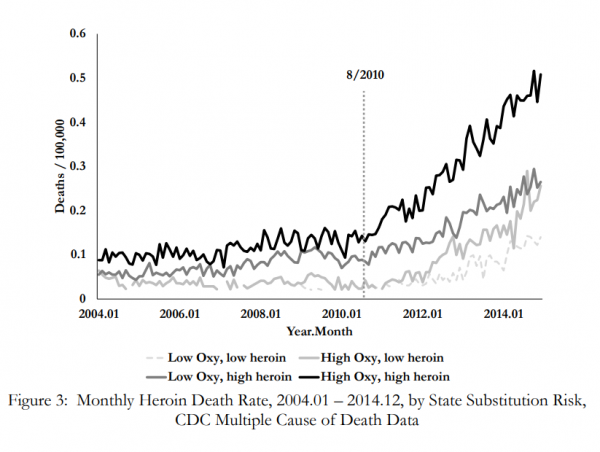 The researchers looked at other potential explanations for these breaks in previous trends: if there was a sudden drop in the heroin price that may have led to more heroin use, whether new prescription drug monitoring databases may have cut off access to OxyContin and pushed people to heroin more so than the reformulation, and if the crackdown on Florida pill mills — which unscrupulously gave out opioid prescriptions — pushed people to heroin more than the reformulation.

The researchers concluded, however, that none of these could be the primary explanations for the paper’s findings. They estimated, for example, that the Florida pill mill crackdown explained at most 25 percent of the increase in heroin death rates in states that were most exposed to Florida’s pill mill supply.

What about fentanyl? This category of drugs has recently appeared in the black market, where fentanyl and its analogs are often laced into other drugs or misleadingly sold as heroin. Since fentanyl is more potent than heroin, this creates a higher risk of overdose, which could explain an increase in deaths. But fentanyl is believed to have taken off in the black market around 2013 — three years after the OxyContin reformulation, so long after the time period that the study looked at.

One caveat is a lot of the people that did shift to heroin from OxyContin likely would have done so anyway. Keith Humphreys, a drug policy expert at Stanford, told me that the “natural evolution” of addiction is that people will over time grow tolerant to the opioids that they’re using and seek out a stronger high. That could have led people to abandon OxyContin for heroin regardless of the reformulation. “A lot of them would have ended up as heroin users,” Humphreys said.

This is also just one study; future research could produce different findings. But for now, the paper suggests that the reformulation of OxyContin may have at least sped up the increase in heroin overdose deaths — perhaps enough to, in the short term, outweigh the lives saved by preventing more OxyContin overdoses.

Humphreys does not doubt that some people really did move on to heroin because of the OxyContin reformulation. He said he personally knows people who did this.

But he cautioned that this does not mean the reformulation of OxyContin was a bad idea.

Taking the argument to an extreme, someone could argue that we shouldn’t do anything to pull dangerous opioids from the market because doing that might lead people to use heroin instead, Humphreys said. “So then we will just keep doing this forever? Keep writing 200 million scrips a year without any protections whatsoever? … No. At some point you have to think about the future.”

To Humphreys, the key point in favor of the reformulation — and other interventions that make opioid painkillers harder to misuse — is that they prevent more people from getting addicted to the drugs. After all, if the problem was that painkillers were so accessible that they made it easy for people to start on a path that ends with misusing and overdosing on heroin, then the inverse is true as well: Making opioid painkillers hard to obtain and misuse will stop people from going down a path of addiction. By Humphreys’s estimate, this could prevent hundreds of thousands of overdose deaths over a decade.

One way to think about this is what Humphreys describes as the “stock” and “flow” of the opioid crisis.

On one hand, you have the current stock of opioid users who are addicted; the people in this population need treatment or they will simply find other, potentially deadlier opioids to use if they lose access to painkillers or the ability to misuse painkillers. On the other hand, you have to stop new generations of people from accessing and misusing opioids — or they will get addicted to the drugs and potentially overdose and die.

Interventions for these different groups don’t have to be in conflict. Consider the example given in the study: A person got addicted to opioids by misusing OxyContin, but when the formula for the pill changed, he lost his ability to misuse the drug, so he began using heroin instead. 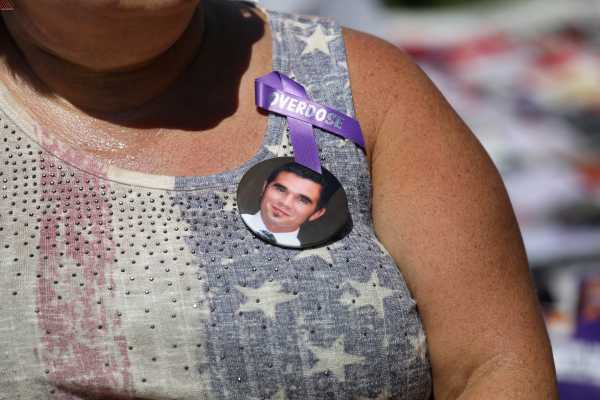 Part of this example shows the reformulation working as intended: The person was so burdened by the change that he felt the need to shift to heroin. For others who aren’t yet addicted to heroin, this burden could stop them from ever misusing OxyContin — and, as a result, reduce the flow of people who would otherwise get addicted to opioids.

For the person already in the stock of people addicted to opioids, however, it didn’t seem to do any good, and in fact may have pushed him to heroin.

But what if addiction treatment was made very accessible? So when this person hit the roadblock to misusing opioids posed by the reformulation, he could have decided that it was time to get into an addiction treatment program, instead of going to heroin. Apply that thousands of times over, and the findings of the paper could have been very different.

The reality of the US today, though, is that treatment is not accessible enough for this to be realistic. According to a 2016 report by the US surgeon general, only 10 percent of people with a substance use disorder get specialty treatment, largely because there aren’t enough adequate, affordable options to get into care quickly. In some states, for instance, waiting periods for treatment can span weeks or even months.

This creates a situation where it’s much easier to get high than it is to get help. So when people face hurdles to getting high because the drug they’ve misused now can’t be so easily accessed or misused, they’re more able — and therefore more likely — to seek out another source of a high than a source of treatment.

Viewed through this lens, the failure of the reformulation of OxyContin was not that it was inherently a bad idea — given that it might have slowed the flow of would-be opioid users — but that it wasn’t paired with other interventions that could have helped the existing stock of opioid users to avert negative side effects within that population.

Lieber agreed that this is plausible. But he argued that the findings of the paper still provide a lesson on the limitations — and dangerous side effects — of well-meaning interventions.

To this end, Lieber emphasized that the paper’s findings only apply in the short term. It’s possible that over time the OxyContin reformulation will slow the flow of people getting addicted to opioids to the point that it will allow the overall stock of opioid users to shrink or at least stop growing — and that will lead to fewer overdose deaths than there otherwise would have been.

Trump’s budget could help fight the opioid crisis — if it...