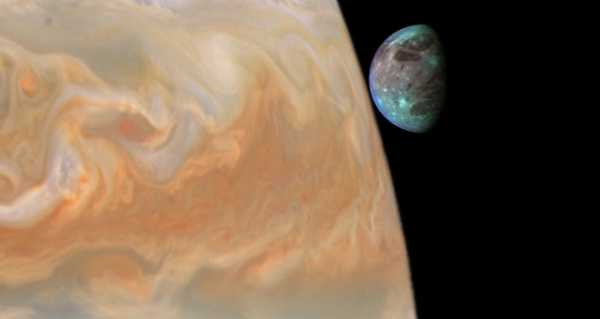 The chunky space rock Ganymede is the most massive moon in the Solar System. The only one in the Solar System that generates its own magnetic field and possesses the most liquid water of any celestial body there, Jupiter’s moon has other intriguing facets that researchers are seeking to probe.

New research claims to have discovered the largest impact crater in the entire solar system.

Jupiter’s biggest moon, Ganymede, with scar-like furrows covering a vast portion of its surface, may now have been confirmed to possess the largest impact structure ever identified.

Scientists behind the research, described in a study published 15 July in the journal Icarus, revisited bservations from a spate of past NASA missions that studied the massive moon, such as twin missions Voyager I and Voyager II, which each flew past the Jupiter system in 1979.

Data from NASA’s Galileo mission, which spent eight years studying the massive planet and its neighbors, was also made use of.

In particular, the scientists puzzled over the furrows or troughs visible on some of the moon’s oldest terrain.
Previous research suggested these furrows were evidence of a large impact that might have left scars across an entire side of Ganymede.

​Scientists behind the new research, led by planetologist Naoyuki Hirata of the Kobe University Graduate School of Science, believe that estimate fell short of the overall picture.

They claim the furrows are due to an impact of such magnitude that it affected the entire moon.

The scientists reanalyzed earlier observations of the so-called Dark Terrain, spanning the oldest surfaces on Ganymede.

New modelling using the revisited data showed furrows fanning out from one point and reaching into the opposite side of the moon as well.

This conclusion, claim the scientists, renders the furrows indicators of an impact event huge enough to leave its mark on all of Ganymede.

In that case, an asteroid at least 30 miles (50 kilometers) across could have been involved in that collision, said the team in a statement.

All of these conclusions mean that the scientists may have uncovered the largest impact scar in the solar system. Estimates suggest its radius might be as large as 4,800 miles (7,800 km).
To date, the largest known impact system is Valhalla Crater on Jupiter’s other moon, Callisto. It boasts a radius of 1,200 miles (1,900 km).

The scientists now hope that fresh data gathered by Jupiter Icy Moons Explorer (JUICE), which the European Space Agency is building and intends to launch in 2022, will be instrumental in better interpreting the furrows on Ganymede to determine what exactly formed them.

​Arriving in the neighborhood of Jupiter’s moon in 2029 and operating there for at least three years, the mission will focus on Ganymede, Callisto and Europa.

The case for fully cleaning up America’s lead problem

Silva stars as Manchester City climb back to the top

“The Wilderness,” Reviewed: Can a Partisan Podcast Save the Democratic Party?...

How Girl Scout cookies captured the heart of America