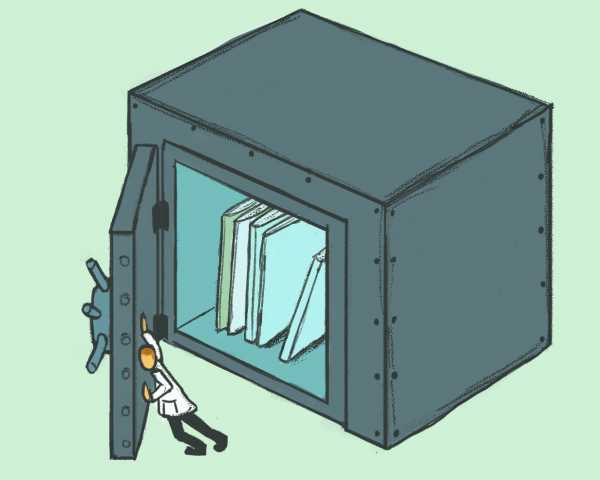 The Trump administration is reportedly considering issuing an executive order that would make it easier for everyone to access publicly funded research.

It’s unclear what’s motivating the administration to issue this mandate, and the text of the potential executive order has not yet been released. At this point, it’s hard to completely evaluate its merits.

But if what’s reported is broadly true, this could be a big win for a movement known as Open Science, which has complained that for too long, taxpayer-funded research has been locked behind expensive paywalls, keeping it out of reach for the people who paid for it.

When it comes to science, the Trump administration is better known for refuting the clear scientific consensus on climate change and for walking back environmental protections. But eliminating the paywall period would actually be quite positive for the dissemination of scientific knowledge.

Publishers, however, are not pleased. On Wednesday, more than 125 scientific publishers of scientific journals (including the behemoth Elsevier, as well as Wiley) and large scientific organizations (like the Association for Psychological Science and the American Geophysical Union, which also publish journals) co-signed a letter condemning the potential executive order. Other notable signatories include the American Heart Association and the publisher of the New England Journal of Medicine.

In the letter, they write that the executive order would “would jeopardize the intellectual property of American organizations engaged in the creation of high-quality peer-reviewed journals” and that the move would “effectively nationalize the valuable American intellectual property that we produce and force us to give it away to the rest of the world for free.”

The publishers fear that the changes might hurt their businesses. There’s merit to this: They’d have to start giving away something they’d normally charge for for free. But there’s a strong case that the existing business model should change. And the publishers are already facing a rising tide of science funders demanding that the research developed from their grant money be published freely for the public to read.

It makes sense that they’d want to protect that. But at the same time, there’s a compelling case that the status quo is holding back science and burdening academic institutions with ever-rising costs.

Some researchers on Twitter think it’s pretty bold for the publishers to speak out in the name of protecting their copyrights, since those copyrights are handed over for free by the scientists seeking to publish in their journals.

Tal Yarkoni, a psychologist at the University of Texas at Austin, summed it up here:

(Read a lot more tweets from the researchers who are speaking out here.)

This is, indeed, how academic publishing works. The industry built to publish and disseminate scientific articles — companies such as Elsevier — has managed to become incredibly profitable by getting a lot of taxpayer-funded, highly skilled labor for free and affixing a premium price tag to its goods.

Academics are not paid for their article contributions to journals. They often have to pay fees to submit those articles to journals in the first place, as well as to publish them. (They may even have to pay fees just for printing graphs and charts in color.) Peer reviewers, the overseers tasked with making sure the science published in the journals is up to standard, aren’t typically paid either.

The war to free science

And there’s more: Academic institutions have to purchase exorbitant subscriptions priced at hundreds of thousands of dollars each year so that they can download and read the work of their own scientists, and well as others, from beyond the paywall. The same goes for members of the public who want to access the science they’ve funded with their tax dollars. A single research paper in Science can set you back $30. Elsevier’s journals can cost, individually, thousands of dollars a year for a subscription.

Publishers and journal editors say there are steep costs associated with digital publishing and that they add value at every step of the process: They oversee and manage peer reviewers and editors, act as quality gatekeepers, and publish an ever-larger number of articles each year. Yet they still make large profits over what’s essentially a public good.

Meanwhile, at many universities across the country, academic librarians pay more and more for their campuses to access journals each year, with costs increasing at a rate that greatly outpaces inflation. That leads to tough choices over whether to buy books or to keep up subscription fees.

If the executive order is issued, Trump will be joining a worldwide fight to free science from this system. In 2018, a coalition of science-funding agencies in Europe — including the World Health Organization, the Wellcome Trust in the UK, and the Research Council of Norway — banded together to mandate that beginning in 2021, the studies they fund must be published without paywalls. Private funders, like the Bill and Melinda Gates Foundation, already stipulate that any papers funded by its grants must be open access.

All of this is a threat to the status quo of academic publishing — which, arguably, for the reasons stated above, needs to change.

As E&E points out, it’s possible there could be negative consequences from the potential executive order. Publishers could decide to make authors of scientific papers pay more upfront to publish their work without a paywall. (This is already commonplace in academic publishing: Researchers can pay, sometimes thousands of dollars, if they want to have their papers published without a paywall.)

And make no mistake: If Trump signs this executive order, he’s still, overall, no friend to science. Recall his public undermining of forecasters at the National Oceanic and Atmospheric Administration, his party’s insistence to ignore climate change science, and his EPA’s limiting of the pool of research it can consider in making public health decisions. That said, this could still be a step in the right direction.

Alcoholics Anonymous works for some people. A new study suggests the...