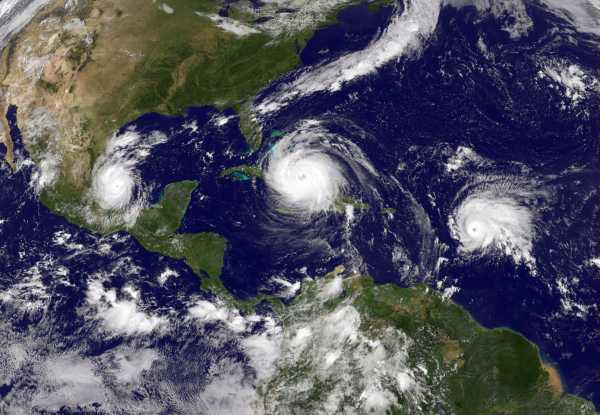 Friday, June 1, is the official start of hurricane season in the Atlantic. It’s already begun, though; Tropical Storm Alberto showed up earlier this week, bringing deadly flooding and mudslides to the Florida Panhandle and the Southeast.

Forecasters are expecting an average number of hurricanes (around seven). But predictions this early are filled with a lot of uncertainty.

The beginning of a new summer storm season is an unsettling marker because we’re still reckoning with the full impact of the punishing 2017 hurricane season and the three Category 4 storms (Harvey, Irma, and Maria) that hit the US.

Just this week, the New England Journal of Medicine published a report finding that the death toll from Hurricane Maria in Puerto Rico is far bigger than previous estimates: At least 4,600 people died as a result of the hurricane and the subsequent humanitarian crisis. That makes it more than twice as deadly as Hurricane Katrina. That’s not all: Parts of the island are still in a blackout after the storm knocked out the island’s power grid, and lots of infrastructure still needs to be rebuilt.

At times, it’s easy to feel helpless in the face of these storms. But thankfully, atmospheric scientists have made huge strides in forecasting the path of storms and how these storms might grow in a climate-changing world. That helps us prepare for the worst.

The 2018 hurricane outlook looks normal. But there’s much uncertainty.

Every year from June through November, there’s a risk of powerful storms in the Atlantic. And for now, scientists’ outlook for the 2018 season is somewhat hopeful, if a bit limited in what they can foresee.

Forecasters at the National Oceanic and Atmospheric Administration predict that the season will be average or slightly above the norm. Specifically, the forecast has a 70 percent chance of seeing between five and nine hurricanes, with a total of 10 to 16 named storms. (Some of those named storms would not be strong enough to attain hurricane status.)

In a separate analysis, atmospheric scientists at Colorado State University forecast an “average” season with 13 named storms, six becoming hurricanes. They find that the Atlantic has cooled a bit in the last two months, making it less conducive to fueling strong storms. However, the researchers note, we “should realize that it is impossible to precisely predict this season’s hurricane activity in early June.”

Indeed, there’s a lot of uncertainty built into the new estimates for 2018. Last May, NOAA predicted an above-normal year for hurricanes. But no one saw the back-to-back-to-back pattern of the storms coming — a grand total of 17 named storms, 10 of which were hurricanes. No one knew it would be one of the 10 most intense hurricane seasons on record.

It’s hard to predict the number of hurricanes because they’re formed by a complicated interplay of climate and weather variables. Yes, warm waters are a key ingredient to fuel storms. But hurricanes are also influenced and steered by massive global trends in weather that are hard to predict: The warming or cooling of waters in the Pacific (El Niño and La Niña), patterns like the Madden-Julian oscillation (an eastward-moving weather system that circles the globe every month or so and makes thunderstorms more likely), and temperature differences between the surface and the higher reaches of the atmosphere all play a role.

Also, NOAA just makes predictions about storm formations, not landfalls. “Hurricane landfalls are largely determined by the weather patterns in place as the hurricane approaches,” NOAA notes in its forecast. We could have an extremely active hurricane season that never harms a single person on land.

What we’ve learned: hurricanes are getting wetter, due to climate change

Last August, Hurricane Harvey dumped a record-shattering 60 inches of rain over some parts of Texas. Over the course of the storm, it’s estimated 24 trillion to 34 trillion gallons of water fell in the area. And the weight of that water was so heavy, it actually depressed the earth more than half an inch in some spots, according to the Scripps Institution of Oceanography.

Climate scientists have now determined — in two separate research efforts — that Hurricane Harvey’s record-blasting rains (best measured in feet for much of Houston) were likely amplified by climate change.

“Human-induced climate change likely increased Harvey’s total rainfall around Houston by at least 19 percent, with a best estimate of 37 percent,” Michael Wehner, a co-author on an attribution study recently published in Geophysical Research Letters, said at the American Geophysical Union conference in December. And the corresponding study in Environmental Research Letters concluded that climate change increased flooding by around 15 percent.

The rainfall increased, in part, because of how abnormally hot the Gulf of Mexico was last summer. Last August, the Gulf reached its highest temperatures on record, a report published by the American Geophysical Union found.

Even with climate change, Harvey’s rain was an extremely rare event, expected not to return for thousands of years, Karin van der Wiel, another author of the Environmental Research Letters study, said. Still, the odds of seeing such an extreme event have changed, she says. “It’s between 1.5 and 5 times more likely now than in preindustrial times.”

And research suggests wetter storms are in our future. More recently, the National Center for Atmospheric Research published a study in the Journal of Climate, simulating a what-if scenario on 22 recent hurricanes. The question: What if these storms formed at the end of the 21st century, in a warmer world?

The hurricanes didn’t grow that much more intense in the simulated model. But they almost all became wetter, spewing more rain. On average, the model found a 25 percent increase in rainfall across the storms — enough to make the difference between a bad flood and a catastrophe.

Climate change science also predicts that storms might grow bigger and more frequent in a warming world, but it’s not quite yet clear if that trend has begun in earnest.

But good news: Hurricane tracking and forecasts keep getting better

Consider what happened with Hurricane Irma last year. That storm skirted through the Caribbean and then took a nearly 90-degree turn northward toward Florida. The NHC predicted this northward turn would happen four days out. There was some uncertainty if the storm was going to impact the Gulf Coast or the Atlantic Coast. “But the fact it was known a few days in advance that the storm was likely to do that was an incredible feat of tech and science,” Rebecca Morss, a scientist at the National Center for Atmospheric Research, said in an interview last year.

Improvements in computer models, computer processors, and data collection (obtained via actually flying planes through hurricanes) all contribute to this great increase in predictive power. 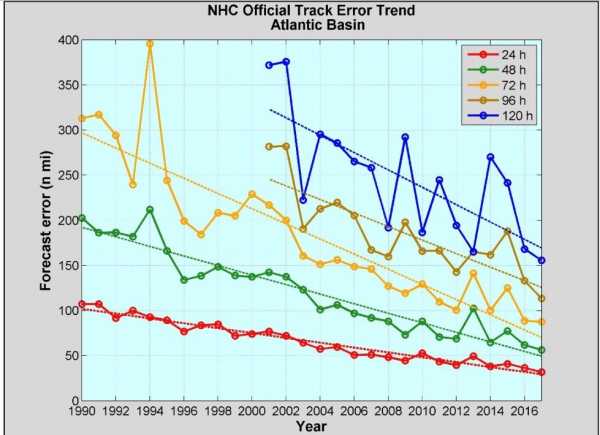 But challenges in forecasting still remain. The chart above shows advances in predicting the path a hurricane will take. Predicting intensity — how strong its winds will be — is a much harder thing to do, and 2017’s intensity forecasts didn’t show much improvement compared to the past several years.

It’s harder because there are so many factors that go into a hurricane’s intensity: ocean temperatures, wind shear higher up in the atmosphere, interactions with land. Atmospheric scientists don’t yet have the density of data or the computer models to make huge improvements in this area. 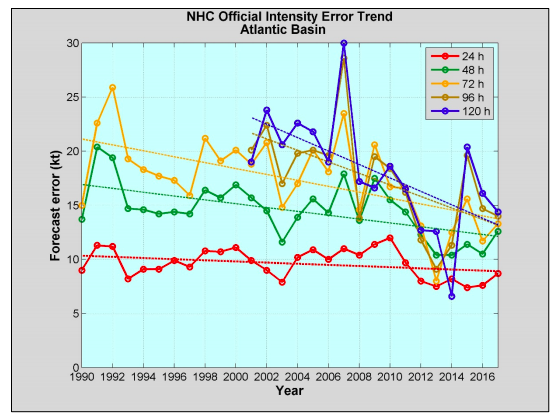 But overall, the trend of increasingly accurate forecasts is likely to continue. NOAA has launched two new satellites monitoring into our atmosphere this year. And it continues to update its computer models to make forecasts.

There may be destructive storms, but we’ll see them coming.

Seán Óg Ó’hAilpín: ‘I don’t like hurling from the start. I...