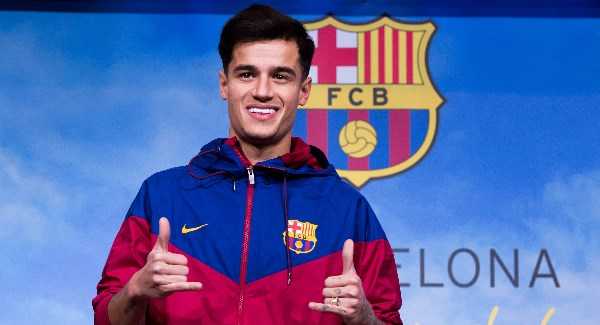 Philippe Coutinho thanked his Barcelona team-mates and supporters for helping to ease his nerves as the club’s record signing made his debut for the Catalan giants.

The Brazil international joined Barca earlier this month from Liverpool in a deal that could reach £142m (€162mm) but a thigh injury prevented him from making his debut until Thursday evening.

Coutinho admitted he had been hit by a bout of nerves prior to coming on against Espanyol – the club he had a loan stint with in 2012 – but said the reaction of his colleagues and fans helped calm him.

He said on Barcelona’s official website: "For me it’s a great night, a very special night.

"They are my first minutes with this club and I’m very happy, thrilled.

"The reception I got from the fans and the players left me happy. I was a little anxious, nervous, but the way they all received me left me very calm."

First-half goals from Luis Suarez and Lionel Messi at the Nou Camp helped holders Barca overturn a 1-0 deficit from the first leg and join Valencia, Sevilla and Leganes in the last four.

Coutinho added: "It’s a special night and we’ve managed to win the game, which is the most important thing.

"It was a difficult game, as you’d expect, against a team who played well. I think from the first half we controlled the game well and we’ve deserved to win."

Barca midfielder Sergio Busquets also felt his side fully deserved their place in the semi-finals and fired a shot at their derby rivals in the process.

That was a notable feat for the underdogs, but Busquets felt their reaction to the victory was somewhat over the top.

He said in Sport: "They celebrated as though they had got through the round after winning the first leg, but the ties last 180 minutes and we’ve shown that we’re much better."

He added: "It’s a competition that we’ve won a lot in recent years. It’s clear that there are priorities in the season, but the cup is important and we’re going to fight to be in the final.

"We’ve controlled the game well, although we knew that one goal could make things complicated."

All Blacks accuse Springboks of pressuring referees into preferential treatment