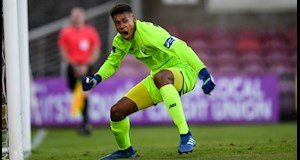 Arsenal’s Calum Chambers has vowed the Gunners will keep fighting to rescue their Champions League hopes.

Unai Emery’s side sit eight points adrift of the top four after Saturday’s 2-0 defeat at Leicester.

Jamie Vardy and James Maddison scored to condemn the Gunners, who are sixth after just one win in their last six Premier League matches.

“There is a big gap now but we’ll stay positive and hopefully we can bring that gap down,” defender Chambers told the club’s official site.

“We’re all together. Everyone in that dressing room and at the club is all together. There is a good spirit in the dressing room, all the lads are together and we need to keep going, fighting and giving it all our all in every game and things will change.

“With the squad we’ve got and the amount of quality we have, we can turn things around.

“We have just got to keep working hard and during the international break, we will work hard on the training ground and it’s important we do that.”Defeat increased the pressure on Unai Emery (Nigel French/PA)

Vardy netted his ninth goal in nine starts against the Gunners on 68 minutes before setting up Maddison to strike soon after.

Victory moved Leicester into second before Sunday’s matches with the Foxes having won eight of their last nine games in all competitions.

“There’s such a good feel around the club at the minute, from the top down, everyone involved,” Maddison told LCFC TV. “We’ve got a real balance to the team and the squad at the minute.

“We’re all enjoying it and we’re all working hard for each other and the results are coming, so long may that continue.

“We’re all in it together, there’s such a good feel at this club and I say it all the time because I mean it.

“We’re all doing it for each other and for the feeling of winning today and, in the changing room afterwards, everyone had a smile on their face.

“The manager’s happy with everything we’ve worked on this week and we put it into practice – so there isn’t a much better feeling than that.”

What does Arsene Wenger leave behind for his Arsenal successor?

Shutdown over: What it means now