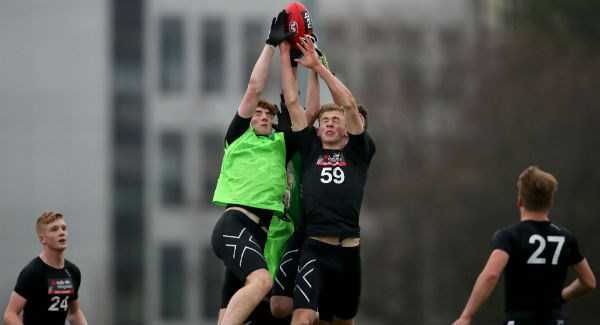 Footballers from Carlow, Down, Derry and Cork will be hoping to impress the scouts as they pursue a professional contract at the AFL Draft Combine in Melbourne from October 2 to October 5.

Carlow senior Jordan Morrissey, Anton Tohill of Derry, Down’s Pierce Laverty and Cork prospect Mark Keane will be put through their paces along with the cream of the domestic talent at Marvel Stadium.

Interestingly, none of the quartet has been identified in the half-back division that has been the most likely siting of Irish converts, with their speed and foot skills proving valuable on the counter-attack.

Although Laverty and Morrissey have been named as medium forwards, it would not be a stretch to see them taking up the traditional berth for the GAA convert, however, should they be signed, particularly as Morrissey excelled in a similar position with his strong running from deep this year.

The Éire Óg 19-year-old was fast-tracked into the senior squad out of the minor ranks by Turlough O’Brien this year and played a major role as Carlow secured promotion in the League and reached the Leinster semi-final following championship victories over Louth and Kildare.

He has been described as “a natural leader” in an AFL communique that also noted Down U20 attacker Laverty’s speed and “excellent natural leap”, plus an elusiveness that would make him useful close to goals and “physically a real AFL type.”

Tohill and Keane have been named in the tall defenders list and will never be emulating Zach Tuohy, Tadhg Kennelly and Pearce Hanley but could certainly have roles as key forwards or ruckmen, depending on their development if managing to secure a contract.

Tohill is the son of former All-Ireland winner, international rules boss and Melbourne clubman Anthony, and a relative of Oisín McWilliams, a fellow Swatragh clubman who recently underwent a trial along with Sligo’s Red Óg Murphy at North Melbourne.

He is the third member of Derry’s Ulster U20 championship-winning squad to attract the attention of AFL scouts, with Callum Brown also understood to be hot property Down Under.

Standing at 6’6’’, Tohill (18) has himself been the subject of much interest already, having stood out at the European Combine in Dublin last December and with the AFL Academy in Florida the following month.

Keane, who is slightly shorter at 6’4’’, also earned an invitation to America on the back of his brilliance in Dublin, amazing onlookers with his speed, kicking, contested marking and most significantly, apparently natural game sense.

A Cork minor last year, the Mitchelstown giant progressed to the U20 team this year, where he was deployed as a target man.

The case that AI threatens humanity, explained in 500 words