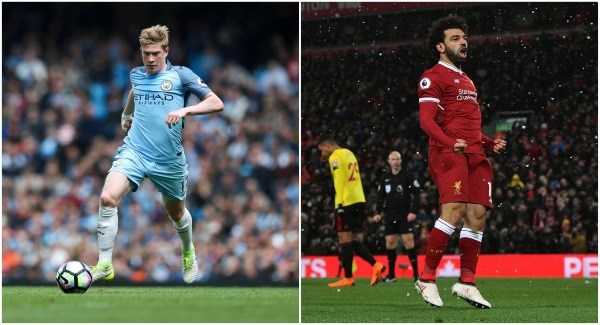 Manchester City have dominated the Professional Footballers’ Association’s Premier League team of the year, with five players named in the select XI.

De Bruyne and Salah are both included

Denmark midfielder Christian Eriksen is also included, along with his Spurs team-mate Harry Kane, the England striker among three forwards in the side completed by Liverpool frontman Mohamed Salah, who has bagged 30 league goals so far this season.

There was, though, no recognition for any Burnley players, despite the Clarets enjoying a fine season and challenging Arsenal for sixth place, which could yet see them secure European qualification.

City duo De Bruyne and Silva are shortlisted for the PFA’s player of the year award, along with club-mate Leroy Sane after all three helped Pep Guardiola’s side win the Premier League.

Kane, Salah and De Gea are also nominated, with the winner set to be announced at the PFA’s annual awards ceremony in London on Sunday, April 22.

Wolves will be playing Premier League football next season after securing promotion, and have three players in the PFA’s Championship team of the year.

Goalkeeper John Ruddy, defender Willy Boly and midfielder Ruben Neves, who scored a memorable goal in the recent win over Derby, all make the XI.

The battle to join them in the top-flight next season looks set to go down to the wire.

Fulham head into the weekend’s matches in third place, just a point behind Cardiff, on the back of an impressive 21-match unbeaten Championship run.

The Cottagers see defender Ryan Fredericks and wing-back Ryan Sessegnon, who has scored 14 goals so far, named in the PFA Championship team of the year, along with midfielder Tom Cairney.

Exciting Fulham prospect Sessegnon, 17, is also included on the shortlist for the PFA young player of the year award.

How much of your online life should police have access to?...

French Government ‘Willing’ to Step Back From Most Contested Pension Reform...

Moscow Expands Bans on EU From Entering Russia in Response to...