Fit-again winger Alison Miller marked her first international start in over a year with a try as the Ireland Women triumphed 22-5 over Scotland at a wet and windy Scotstoun Stadium tonight. 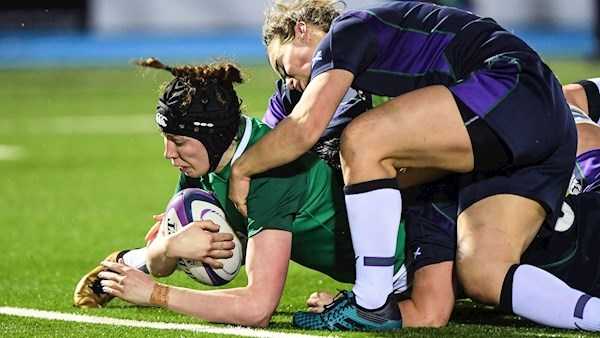 Miller’s 20th try of her Six Nations career arrived five minutes into the second half and player-of-the-match Anna Caplice burrowed over on the hour mark as Ireland avenged last year’s 15-12 home defeat to Scotland.

Ireland’s strong start in Glasgow was rewarded with lock McDermott’s sixth-minute try, the initial damage caused by a well-worked maul and although Miller was crowded out on the left wing, Nicole Fowley cleverly straightening up the attack with a sharp run and McDermott managed to drive through Debs McCormack’s tackle and crash over to the right of the posts.

Scotland regrouped impressively and quickly got their pacy backs on the ball as Chloe Rollie and captain Helen Nelson both made breaks.

They turned down a kickable penalty straight in front of the posts before retaining possession off two scrums and then sending the pacy Smith darting over out wide as she exploited a gap between Michelle Claffey and Miller.

READ MORE: Back on Leeside! Kevin O’Connor signs on loan for Cork City

Like Fowley, Lana Skeldon also missed the conversion, and Ireland’s attempts to respond were spoiled by some poor decision-making and handling errors.

Nonetheless, they continued to ask questions of the Scottish defence with the heavily-involved Ailsa Hughes, who pressed from a couple of quickly-taken penalties, brought down by full-back Rollie to end a promising break.

They had to convert the pressure into points and duly succeeded in scoring on the stroke of half-time. With the elusive Eimear Considine and Miller both evading tackles on opposite wings, the girls in green crept back into try-scoring range.

Off a reliable set piece platform, the Irish pack forced the issue late on and there was no stopping Lyons – and the latch from Laura Feely – from five metres out.

Early pressure on the restart yielded a third unconverted try as Lyons went close from another bout of forward pressure before Miller, who broke her leg against Italy a year ago, did well to hold onto Sene Naoupu’s pass to slide over in the left corner.

Ireland were territorially dominant now and punchy carries from captain Ciara Griffin and Claire Molloy, coupled with a scrum won against the head, hammered home that advantage.

They continued to take Scotland through some strength-sapping phases and Molloy was stopped just short before Caplice, another of the all-action flankers on show, plunged over to wrap up the result in the 58th minute.

Out-half Fowley converted with aplomb for her only success on a difficult night for goal-kickers, and it was her booming relieving kick which brought up Scotland’s best attack of the second half.

Ireland were able to hold them at arm’s length for the remainder, despite a fine individual performance from Scottish hooker Skeldon who had an impact on both sides of the ball.

One particular turnover penalty thwarted the visitors just as they appeared to be building for another try. Instead, smart kicking from Fowley and replacement scrum half Kathryn Dane kept the Scots pinned and the 17-point gap remained in place.

Sen. Brian Schatz on why he doesn’t need to pay for...