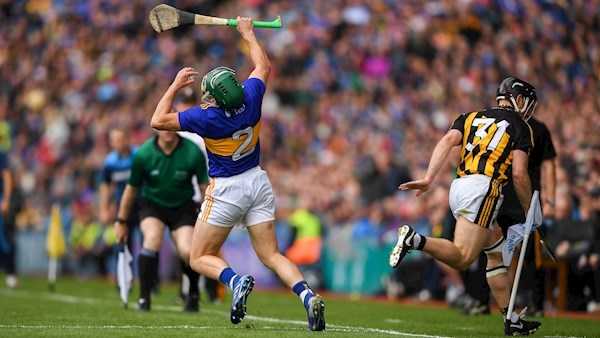 Cathal Barrett says former Kilkenny players are “clutching at straws” by highlighting an incident in yesterday’s All-Ireland final where he caught Richie Hogan in the face with his hurley.

Having watched the clash back on video, the Tipperary defender argues there is no comparison with the foul that saw Hogan sent off in the final.

Barrett also laughed off accusations from Jackie Tyrrell that he went down too easily when caught by Hogan’s elbow. Though Barrett says he felt sorry for the Kilkenny forward when James Owens produced the red card.

“Cathal Barrett, for me, went down way too easy,” Tyrrell said on The Sunday Game. “He made an awful lot of it.”

Owens appeared to check on the prone defender before making his decision to dismiss Hogan.

“I was a little dazed. It wasn’t my decision. The doctor has to assess me. There’s nothing I can do. The more I try to get up, I can’t…

“I was a bit rattled, so the doctor did assess me. He wasn’t going to let me back until I answered the protocol questions. He asked a couple of questions and checks your eyes and things like that, to see if you are actually with him…

“It’s a pity that the day is taken away from someone like that.

“Biggest day of the year and you’re training for nine months. Of course, you’d feel sorry for him. And he’s not that type of player, in fairness.”

Barrett conceded a free but wasn’t carded for the incident which saw Hogan leave the field briefly to patch up a nose injury.

“For God’s sake, if you slow it down, Richie throws up the ball and I go to flick it and I think it’s my wrist that actually touches off his helmet. And I made contact with the ball as well. Hence why James Owens didn’t give me a yellow card. If lads are on about that they are clutching at straws.”

Barrett limped off near the end of yesterday’s final with a hamstring strain, having excelled in the second half as Tipp’s extra defender.

“I had no instructions (for the free role). I was free. It was just instinct. You play it as you see it. The boys have given us enough coaching over the last nine months. They trust us on the field.

“I’ve a lot of work put in. Blood sweat and tears put in the last nine months. It hasn’t been an easy road. But this is why you do it. The group is unreal. If anyone has any bad day, you can always turn to those boys and they will pick you up. They’re an unbelievable group of men. It makes your life easy going in for training. You’ve no bother training in the muck and hardship with these lads.”

There was a word too for the boss, Liam Sheedy, and the energy he has injected in the Tipp setup since his return.

“Liam is a remarkable man. He’s the engine room of our dressing room. He just drives, drives, drives and he drives perfection and standards. He will leave no stone unturned. He’ll make sure you are the best and he’ll bring you along with him and make you into the machine he wants.”

One big reason you can’t get rid of cockroaches