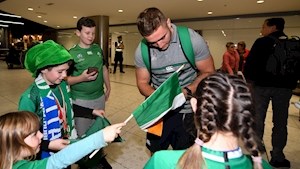 Wales back-row forward Josh Navidi has been ruled out of the World Cup with a hamstring injury.

Wales head coach Warren Gatland confirmed Navidi would miss the rest of the tournament because of the injury suffered in the quarter-final victory over France on Sunday.

Wales play South Africa in the semi-finals in Yokohama on Sunday.Navidi is a big loss to Wales (Ashley Western/PA)

Gatland said that Wales would be calling up a replacement, although it would not be a back-row forward.

The suggestion is that he will add a back to the squad, although no decision on any particular player has yet been made.

Navidi’s loss is a blow, but Wales have considerable back-row resources with the likes of Aaron Wainwright, Justin Tipuric and Ross Moriarty all performing well.

Centre Scott Williams and wing Owen Lane could be among those players who come into the mix as potential replacements for Navidi.Coach Warren Gatland has plenty to ponder (David Davies/PA)

Wales will hope to have centre Jonathan Davies available for the Springboks clash.

He missed the France game due to a knee injury, with Owen Watkin replacing him and partnering Hadleigh Parkes in midfield.

Pilot Yaroshenko’s Defence to Ask Court to Release Him Due to...

Why the Democratic Party doesn’t want a presidential debate about climate...