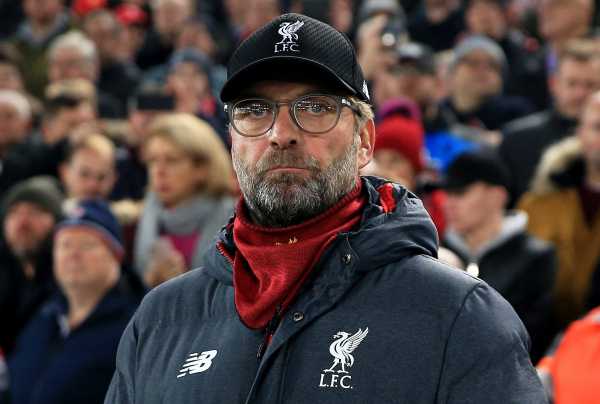 Liverpool manager Jurgen Klopp has reassured Manchester City they should have no concerns about their arrival at Anfield on Sunday but accepts “it is our fault” if reservations remain.

City have reportedly voiced their worries about a repeat of the incident in the Champions League quarter-final in April 2018 when damage was caused to their team coach.

Liverpool apologised, paid compensation and were fined £17,500 by UEFA and, last season, the Premier League match at Anfield passed off without incident.

However, after Merseyside Police confirmed they were aware of one social media post urging fans to bring “pyros and pints”, Klopp sought to play down Sunday’s welcome.

“I’m a big believer of fan power – in the stadium. That’s completely different,” he said.

“(The coach incident) was a senseless thing. If somebody at Man City is concerned still, then it’s our fault.

“Not that we did it all together, we all didn’t throw the bottle or whatever it was, but it was one of us.

“That’s why we are responsible. All of us have to make sure that something like this will never happen again.”

Merseyside Police said a “comprehensive and appropriate” operation was in place for Sunday.

They also highlighted how well last season’s visit had gone in terms of a lack of trouble.

“We are aware of one poster on social media regarding a bus welcome,” said superintendent Paul White.

“The corresponding last fixture ran smoothly and we are working to ensure this game can be enjoyed safely by all as well as minimising any disruption to local residents and roads.

“As with all Premier League fixtures at Anfield, we will have officers on duty at the ground, both uniformed and plain-clothed, supported by mobile CCTV, provided by Liverpool City Council, and specialist resources including the dog section, mounted police and the National Police Air Service.

“We will also have a city-centre policing plan in place throughout the day. This is standard procedure.

“We know that this will be a busy operation and we hope that fans attending the match will act as ambassadors for their clubs.”

Klopp made a similar plea, urging fans to save their energy for inside the stadium.

“It’s long ago and since then nothing has happened. I don’t think it was Man City specific,” he added.

“After the punishment we got we haven’t had a similar situation – the positive outcome of something like this.

“Actually, we used to enjoy that (the coach welcome), when we come in, it’s impressive. It’s a nice part of football, but if you overstep the line then it’s not allowed that you do it anymore. That’s how it is.

“Everybody agrees to feel this responsibility that it won’t happen again.

“That’s why I say: ‘Go in the stadium, nothing to do outside, have your food, go in, wait for the team, we will come, let’s make a pretty special game of it’.

“In football, you never know what you get for it. But we know what we have to do for it. Let’s make sure that we show that.”

The Best Archival Jazz Releases of 2018 |