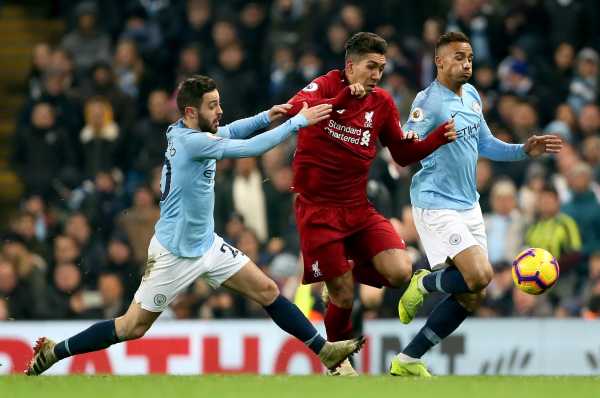 Liverpool and Manchester City go head-to-head for the first time in this season’s Premier League on Sunday with City needing a result to stay in touch with their title rivals.

Already trailing by six points, defeat for visitors City would leave them well adrift in the hunt for a third straight title.

Here, the PA news agency looks at what the statistics can tell us ahead of the game.

City’s recent record at Anfield will give them cause for concern going into Sunday’s game.

They have not won at the venue since May 2003, when Nicolas Anelka scored both goals in a 2-1 Premier League win for a City team featuring Peter Schmeichel, Joey Barton and Robbie Fowler.

Since then they have drawn six and lost 12 of their 18 visits in all competitions, including six straight defeats before last season’s goalless draw.

Added to that, star striker Sergio Aguero has never scored at Anfield in eight appearances for the club, nor in his two visits with previous employers Atletico Madrid.

Indeed, of the current City squad, only David Silva, Bernardo Silva, Ilkay Gundogan and the injured Leroy Sane have scored for the club at Anfield.

Potent attack to buck the trend?

Aguero, though, plays his part in this season’s leading Premier League attack – and that is what will give City hope of ending their miserable run at Anfield.

With 34 goals, City are seven clear of Leicester as the top-flight’s top scorers and nine ahead of Liverpool – while their goal difference is eight better, despite their six-point deficit at the top.

The statistics underpinning that tell the same story – City have taken 240 shots this season, 53 clear of Liverpool’s second-placed tally, and have hit the woodwork 10 times. That is twice as often as any other side, suggesting their goal tally could be even more dominant.

Aguero is joint second in the Golden Boot race with nine goals, one behind the Foxes’ Jamie Vardy, while Raheem Sterling has seven and Kevin De Bruyne has set up nine.

Liverpool are clear at the top, unbeaten and with the most wins in the league, but with such a potent attack City will hope the breaks go their way this weekend for an overdue Anfield win.

That has been the case in the last two seasons as well, though – City led the league by six goals and 76 shots last season and by 22 goals and 27 shots in 2017-18 – and trips to Anfield have produced only that goalless draw and 4-3 loss.

No Johnny Sexton or Rob Kearney for Leinster’s Euro derby with...