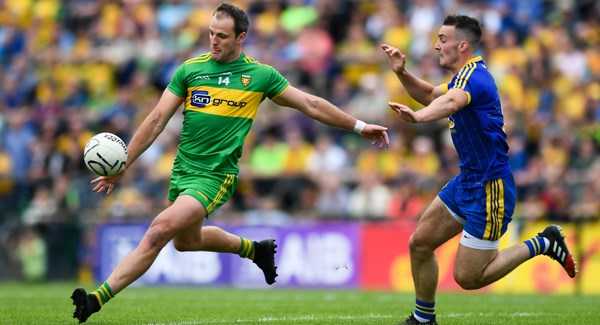 Having fallen by 18 points to Tyrone last weekend, Roscommon put 13 bodies behind the ball, with just Diarmuid Murtagh and Cathal Cregg operating in attack.

Donegal were five adrift of Dublin last Saturday but were never in danger of coming off second best here. Michael Murphy was restored to full-forward and finished with nine points, five of which came from play.

The home side, to be fair, opened brightly and were 0-4 to 0-2 in front by the 12th minute, Ciaráin Murtagh and Brian Stack kicking fine points.

They would not score again, however, until the 34th minute, by which juncture the visitors to the Hyde were five clear.

A pair from Ciarán Thompson and three-in-a-row from Murphy established daylight between the teams and Donegal’s 0-10 to 0-5 interval lead could have been so much more substantial but for seven first-half wides.

Roscommon’s approach clearly didn’t suit. Their transitioning from defence to attack was poor, even poorer was their attempts to find either Cregg or Murtagh among a sea of green Donegal shirts.

One of the main talking points was the scuffle at half-time, with irate Roscommon manager Kevin McStay throwing a ball at the linesman’s head. He was not on the sideline for the second period.

Brian Stack kicked a point within 20 seconds of the restart to narrow that gap to four. No closer would they come.

MacNiallais, Murphy, McLoone and Martin Reilly all swelled their tally to run out comfortable seven-point winners.

The longest lunar eclipse of the century is on July 27