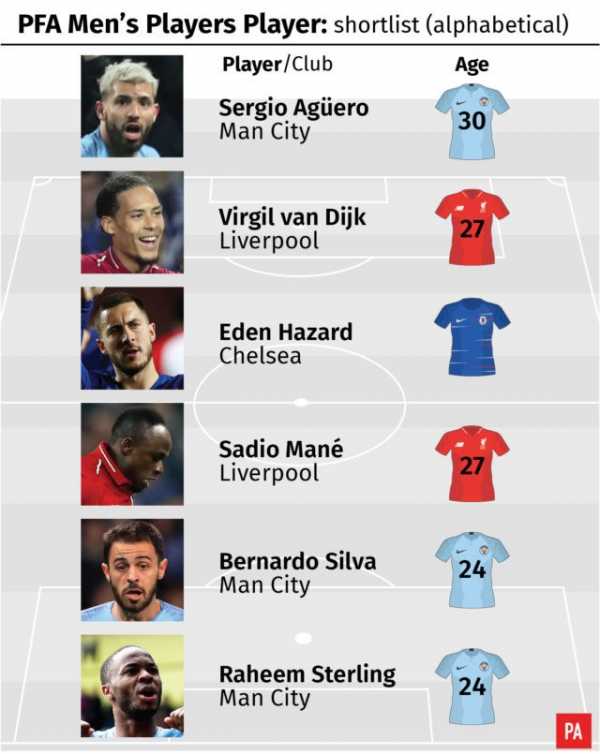 Chelsea’s Eden Hazard completes the nominees for the 2018-19 campaign, with the winner scheduled to be announced on Sunday, April 28 at the PFA’s annual awards ceremony in London.

Van Dijk, signed from Southampton for £75million in January 2018, has been an ever-present rock at the heart of the Premier League’s tightest defence this campaign. He has helped Liverpool keep 18 clean sheets and concede only 20 times, while also chipping in with three goals.

Senegal international Mane – included ahead of last year’s winner Mohamed Salah – has also enjoyed a stellar season for Jurgen Klopp’s side, hitting 18 league goals as the Anfield club attempt to end a 29-year wait to be champions.

Sterling is currently the bookmakers’ second favourite for the award behind 27-year-old Van Dijk and has been key for Pep Guardiola’s defending champions, having contributed 17 goals and nine assists going into the weekend.

Aguero and Silva have also been integral parts of the division’s best attack this term.

Argentinian Aguero, City’s record goalscorer, has registered 19 of the club’s 86 goals and provided seven assists, while Portuguese Silva, who has become increasingly influential at the Etihad Stadium, has managed six goals and seven assists.

There is guaranteed to be a new name on the Young Player of the Year award.

Alexander-Arnold has contributed to Liverpool’s defensive solidity and also provided seven assists from right-back, while the fine form of Hammers midfielder Rice led to his England debut following his change of allegiance from the Republic of Ireland.

Wales international Brooks has scored seven times and assisted five goals during an impressive debut season in the top flight after swapping Sheffield United for the south coast. Rashford, meanwhile, has managed 10 goals and six assists for Manchester United.