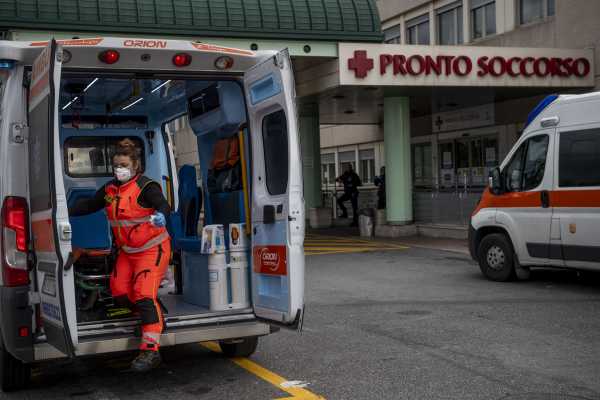 The Covid-19 outbreak in Italy offers plenty of lessons for the United States and the rest of the world — if only we would heed them.

A trio of academics — Gary Pisano, Raffaella Sadun and Michele Zanini — broke down some of the key takeaways from the Italian experience in a new Harvard Business Review article. Italy reached nearly 100,000 Covid-19 cases and more than 10,000 deaths by March 29, becoming the deadliest epicenter in a worldwide pandemic. The authors called Covid-19 the country’s “biggest crisis since World War II.”

Beyond the scale of the coronavirus spread there, the Italy outbreak has been marked by a halting and inconsistent response from government officials. They were slow to implement strict social distancing measures and, even once officials began to institute social distancing as Covid-19 cases began to spike, the public did not seem to respond to government directives with urgency.

At this point, the number of confirmed Covid-19 cases in the US is greater than the number in Italy both in terms of raw total and with respect to confirmed case counts at the same point in our respective outbreaks. 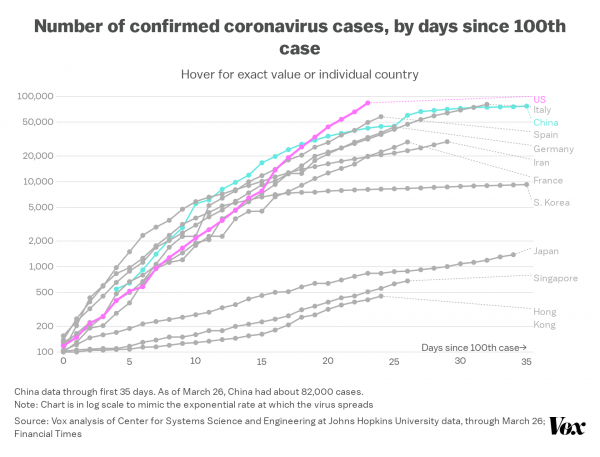 The Harvard researchers warn Italy suffered from “a systematic failure to absorb and act upon existing information rapidly and effectively rather than a complete lack of knowledge of what ought to be done.”

The unavoidable implication is the US is already on the road to the same fate — unless it acts quickly, and pays attention to other countries’ mistakes. Here’s what the US can learn from where Italy went wrong.

We have to get over our pre-existing biases

First and foremost, the US has to recognize the seriousness of the situation. A couple of weeks ago, it was common to see private citizens and government officials skeptical of the Covid-19 threat pointing to low fatality numbers and asking why there was panic, given how many people die of the seasonal flu every year.

But they were already dealing in the past. The coronavirus spreads stealthily, with those who contract it not showing symptoms for days, and the full gravity of their illness not becoming clear until a week or two after infection. This means that back when skeptical perspectives were still common, the seeds had been planted for the explosion in US cases and deaths seen in the last few days.

Italy’s political leaders did not act preemptively despite evidence suggesting such delayed increases in cases were possible. State-of-emergency declarations were shrugged off by the public and political leaders. In one ominous episode, a group of politicians engaged in deliberate handshakes even after the Covid-19 risks were known — and one of them was diagnosed with the infection a week later.

Those lax attitudes reflect the same confirmation bias seen in the United States and elsewhere, the Harvard authors state:

So the first step to a better pandemic response is acknowledging the current situation. In the US, President Donald Trump downplayed the coronavirus threat. He’s sent mixed messages, at times seeming to suggest people could go to work even if they weren’t feeling well. And then after finally being forced to take more drastic measures as the virus spread, he has already started pivoting to a new irresponsible stance, floating an end to social distancing (and the economic toll it is taking) as soon as Easter in mid-April.

But the coronavirus doesn’t care what the US and its leaders want to be true. The country’s response shouldn’t be constrained based on unrealistic expectations for how the outbreak will play out. Which leads to the researchers’ next point.

We can’t take half measures to combat the coronavirus

Italy started small with its coronavirus containment and only expanded it as the scale of the problem revealed itself. The country started with a targeted strategy: certain areas with a lot of infections were designated as “red zones.” Within the red zones, there were progressive lockdowns depending on the severity of the outbreak in the area. The restrictions were only broadened to the whole country when these measures did not stop the virus’s spread.

In fact, these limited lockdowns might have made it worse. Because the coronavirus transmits so silently, the “facts on the ground” (number of cases, deaths, etc.) didn’t actually capture the full scale of the problem. Once partial lockdowns went into effect, people fled to less restricted parts of the country — and they may have unwittingly taken the virus with them, according to the Harvard researchers:

The US is already deep into a similarly piecemeal response. Trump did issue his recommendation that people stay home for 15 days to stop the Covid-19 spread, but he does not look ready to renew that call. States have taken very different approaches: some, like New York, California, and Washington, have almost locked down completely. Others, like Florida, have been reluctant to take the same step. Some states are already attempting to prevent people from states most affected by the outbreak, like New York and New Jersey, from entering their borders.

Italy’s experience indicates that truncated social distancing periods and a mishmash of social distancing policies across different interlocked areas will ultimately only prolong and deepen the problem. Luckily, the country’s provinces that took a more proactive approach may have something to teach their neighbors — and the US.

We have to learn from successful containment strategies

You might wonder why the Harvard experts looked at Italy instead of South Korea or Taiwan, places that successfully managed the coronavirus threat from the start. One reason was that the US and many European countries had already lost the opportunity for those containment strategies by the time they began more aggressive measures, given the slow response to the outbreak at first. This makes Italy a much closer comparison to what the US is living through than those Asian countries — or even China — where the growth in reported cases has slowed to a crawl.

But there are strategies that have worked for the Italians, and the US can borrow them. The experiences of Lombardy and Veneto, two neighboring Italian provinces that took two different strategies for their coronavirus response and saw two different results, are instructive. Lombardy has 10 million people, and it’s endured 35,000 Covid-19 cases and about 5,000 deaths; Veneto is home to 5 million people, but it’s seen just 7,000 cases and less than 300 deaths, its outbreak a fraction the size of its neighbor’s.

This is what Veneto did to successfully control the outbreak within its borders:

Lombardy, on the other hand, was much less aggressive on all of those fronts: testing, proactive tracing, home care, and monitoring workers. Hospitals there were overwhelmed, while Veneto’s have been comparatively spared.

And yet it took weeks upon weeks for Lombardy to adopt the same strategies that were already working next door in Veneto:

America’s health system, like Italy’s, is highly decentralized. Americans are likely to see different strategies across states and cities, and surely different results. In an ideal world, our government would take what works (as soon as it becomes clear) and apply it to the rest of the country.

We have to be ready for the long haul

The Harvard researchers also single out the importance of good data — the raw numbers themselves — which were lacking in the early days of Italy’s outbreak. These figures should focus on the important metrics like tests conducted and hospitalizations. Some questions have already been raised about whether the US is undercounting its fatality numbers, per this BuzzFeed report, and vigilance is warranted about the official numbers coming from an administration known for its obfuscation of the truth.

What those numbers say, and what policies they suggest might be most effective at mitigating the outbreak, is largely a concern for policymakers, journalists, and medical professionals. But it is important everyone sees those numbers to help underscore the authors’ concluding point, which seems essential for the public to understand:

“A war-like mobilization.” Even today, a couple weeks into this national emergency, it’s not clear everyone understands the depth of commitment and sacrifice beating the coronavirus might require. If that — and the massive number of lives at risk — was widely understood, the country would not have a president prematurely entertaining an end to social distancing or other politicians talking about letting our older generations die off for the sake of the economy.

A new projection of the US Covid-19 pandemic came out Thursday from the University of Washington’s Institute for Health Metrics and Evaluation. It anticipates 81,000 deaths in America over the next four months, and the rate of fatalities starting to ebb only in the first week of June, when the daily death toll is projected to fall below 10. They foresee a major risk that the number of serious cases exceeds the US health system’s capacity in hospital beds, ICUs, and ventilators.

Those projections may already be optimistic, as this Twitter thread on their methodology from UW epidemiologist Carl Bergstrom suggests. But even that optimistic scenario depends on rigorous social distancing and a herculean effort to shore up the health system to prevent it from being overrun.

Of the 81,000 deaths, already an alarming figure, the researchers warn: “This number could be substantially higher if excess demand for health system resources is not addressed and if social distancing policies are not vigorously implemented and enforced across all states.”

The response in the US so far on both of those points has been, at best, mixed. There are already supply shortages at hospitals and permissive attitudes from some politicians and media figures, which could portend an even deadlier outbreak.

The lessons needed to achieve a better outcome are already out there to learn from, as the Harvard review of Italy’s mistakes and successes makes clear. But America has to be ready to listen. Even now, two weeks into a national emergency the likes of which few people alive have ever seen, it’s not clear that it is.