Home Technology No, you can’t just nuke a hurricane. But there are other options. 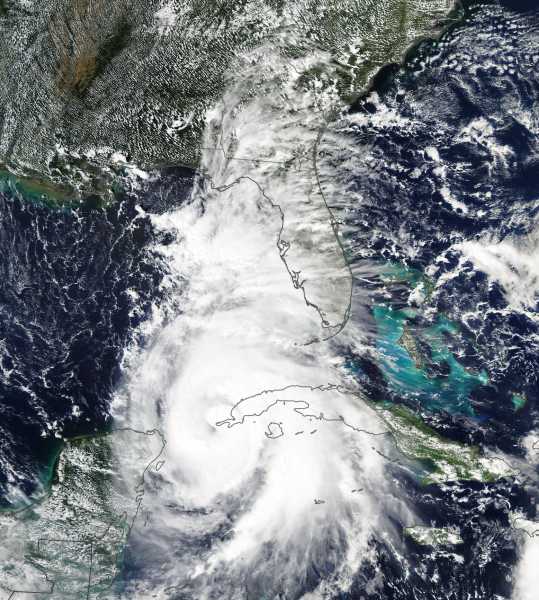 No, you cannot just drop a nuclear weapon on a hurricane.

Yet the notion that a sufficiently large explosion could blow a hurricane apart doesn’t seem to go away. Now Axios is reporting that President Trump on multiple occasions broached the idea nuking hurricanes to prevent them from making landfall to senior Homeland Security officials.

This is a bad, bad idea.

Now it’s understandable that one might wonder if anything can stop a hurricane given the immense death and devastation such a storm can bring. But as NOAA meteorologist Chris Landsea has explained, hurricanes are so powerful that even a nuclear weapon, or several, would barely nudge such a storm. (Trump has now denied that he ever made such an inquiry.)

For one thing, the average hurricane’s wind energy equals about half of the world’s electricity production in a year. The energy it releases as it forms clouds is 200 times the world’s annual electricity use.

And these calculations are just for typical hurricanes, not the extraordinarily intense ones we’ve seen lately, like Hurricane Florence, Hurricane Harvey, and Hurricane Maria.

So there’s really not much anyone can do once hurricanes like these spool up, and many have tried and failed to stop full-on hurricanes in their tracks.

However, rising sea levels and increasing average temperatures due to climate change are further expanding the destructive reach of these storms. And with an eye to the potential to save lives and avoid billions of dollars in damage, some engineers and entrepreneurs, including Microsoft co-founder Bill Gates, are studying ways to dial back the destruction in more plausible ways.

Much of the research is focused on manipulating temperature, moisture, and wind to steer when and where these storms will occur. It involves geoengineering with giant tubes and aerosols. And it’s pretty intriguing — if still quite preliminary.

Scientists have tried to stop hurricanes — and failed miserably

Weather modification has a long, sordid history and hurricanes have inspired some of the more far-fetched proposals, from bombarding cyclones with sonic booms from aircraft to beaming down microwaves from space into nascent storms.

In one of the most infamous attempts to slay a hurricane, Nobel laureate Irving Langmuir led a US military experiment in 1947 to seed Hurricane King with ice in hopes of sapping its vigor. The storm at the time was sliding away from the United States and losing strength.

In an excerpt in The Atlantic from his book Caesar’s Last Breath, author Sam Kean explained Langmuir’s idea: Growing ice in the eye of the hurricane would make the eye grow wider and collapse the storm. But Hurricane King didn’t respond as expected. “To everyone’s horror, it then pivoted—taking an impossible 135-degree turn—and began racing into Savannah, Georgia, causing $3 million in damage ($32 million today) and killing one person,” Kean writes.

Other meteorologists at the time were skeptical that Langmuir’s experiment made the storm change course.

US scientists continued to study seeding clouds inside hurricanes as late as 1983 under Project STORMFURY. But they concluded, according to NOAA, that “cloud seeding had little prospect of success because hurricanes contained too much natural ice and too little supercooled water.”

The remaining tactics for fighting hurricanes require weakening them before they start by deliberately cooling seas and brightening clouds when storms are brewing, robbing them of the fuel for their destruction.

Stephen Salter, an emeritus professor of engineering design at the University of Edinburgh in Scotland, has studied how to harness wave energy since the 1970s, and in 2003 began looking into using this energy to cool the seas.

A less-crazy but still far-out idea: cooling the seas with a giant tube

For ocean temperatures, the magic number for hurricane formation is 26.5 degrees Celsius (or 79.7 degrees Fahrenheit). So what if you could nudge that number down early on and reduce the risks and intensities of ensuing storms?

That was what Salter set out to do.

To cool the surface of the ocean, Salter invented a wave-powered pump that would move warm surface water down to depths as far as about 650 feet.

Made from a ring of tires lashed together around a tube extending below the surface, waves would overtop the ring, pushing the column of water down, while a check valve in the tube would keep it from flowing back.

(Microsoft co-founder Bill Gates also filed for a patent in 2009 to cool the ocean’s surface with barges to fight hurricanes.)

The idea is that hundreds of thousands of these devices in hurricane-prone regions of the world would cool waters enough to make a measurable reduction in the strength of storms.

This is the observation that for clouds containing the same amount of moisture, the clouds with smaller suspended water droplets reflect more sunlight.

The increased sunlight reflectance in the sky would keep the waters below from warming up to the hurricane threshold while also curbing evaporation, thereby reducing the atmospheric moisture needed to make a storm.

“If you really want to stop hurricanes, I believe that cloud brightening is the better way to do it,” Salter said. Cloud brightening yields a much greater impact on the weather for a much smaller perturbation than directly cooling the ocean, he explained. 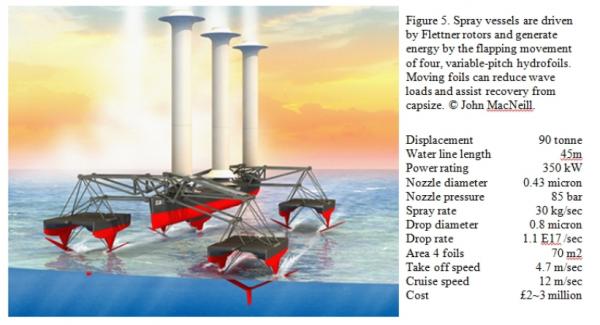 This would be much cheaper than spraying aerosols from aircraft, the boats could target specific regions, the effects would dissipate quickly and the change in cloud brightness would be imperceptible to the human eye.

He estimated that it would cost $40 million to construct a prototype cloud seeding system but has not been able to find any public or private takers.

“At the moment, the governments are saying its premature, we don’t need it yet,” he added. “Irma might change their minds.”

However, Salter acknowledged the prospect of cloud brightening is just an idea at this point. “Most of the work is done in computers,” he said.

One reason diffusing a hurricane is so hard: conditions have to be perfect and they’re often not

For those that have tried out weakening the ingredients of hurricanes in the real world, the results have been disappointing.

Atmocean, a company developing ways to harness energy from ocean waves, looked into making devices to cool the surface of the ocean after Hurricane Katrina in 2005.

Unlike Salter’s device, Atmocean’s approach used a contraption to instead bring cooler water from the depths up to the surface.

The test devices proved successful, but only under ideal wave, temperature, and geographic conditions.

“The physics of it work if the conditions are right,” said Atmocean CEO Philip Kithil. “You can in fact reduce the upper ocean [temperature] by a degree Celsius, maybe 2, which would have a measurable effect on the intensity of the hurricane, but the practical concerns were hard to overcome.”

The wave pumps have to be right in the path of a developing hurricane, and they require cool water to be at an accessible depth, which isn’t always the case. It definitely wasn’t the case in late August when Hurricane Harvey barreled through the Gulf of Mexico toward Texas.

“Harvey passed through an area where there was warm water all the way down to the bottom of the ocean,” Kithil said. “If there is no cold water, you can’t change anything.”

According to a study the company conducted looking back at Katrina, they found that they would need to deploy 100,000 pumps over just two days at a cost of $1,000 each, leading to a price tag topping $1 billion to mitigate the effects of the storm.

At those prices, planners have to consider whether that money would be better spent elsewhere, such as evacuations or shoreline hardening, and neither insurance companies nor governments were willing to investigate further.

Reinsurance firm Swiss Re estimated that Katrina led to $80 billion in insured losses.

Kithil noted that the company also had a hard time finding buyers for their devices. “The insurance industry was not willing to invest, since it was too early stage, too hypothetical,” he said. “And governments are not that proactive.”

Atmocean bowed out of the weather modification business in 2007 and has since pivoted toward using wave energy to drive desalination and onshore aquaculture.

Some hurricane researchers are skeptical these schemes will ever work

At the same time, hurricane researchers have grown weary of responding to proposals to slow storms and most remain skeptical that any tactic could be deployed in large enough numbers to have an effect on giant cyclones.

“As a general comment they show a lack of appreciation for the physical scale of hurricanes and simple ignorance of how they work,” wrote Hugh Willoughby, a hurricane researcher at Florida International University, in an email.

Mark Bourassa, associate director of the Center for Ocean-Atmospheric Prediction Studies at Florida State University, echoed the skepticism about scale.

These ideas might be useful thought experiments to better understand the makings of hurricanes, but Bourassa noted that there always concerns about unintended consequences, especially about deploying these tactics at scale.

Scientists already have a hard-enough time recognizing hurricane progenitors and figuring out where the storms will go once they’re spinning, so adding artificially brighter clouds and cooler waters to the mix could prove dangerous.

“I’d be really nervous about trying them,” he said.

For now, computer models are the only place to deploy hurricane mitigation tactics, but that hasn’t deterred Salter, who despite his retirement and lack of a patron says he’s “still working seven days a week on it.”

Which is all to say that if President Trump were truly interested in slowing down hurricanes, there are several less-theatrical and safer options he can pursue than using a nuclear weapon.

World Cup reporter defiant after being groped during TV broadcast

The enigma of Carlos Vela: How one of the world’s best...

“The Burial of Kojo,” Reviewed: A Boldly Lyrical Portrait of a...