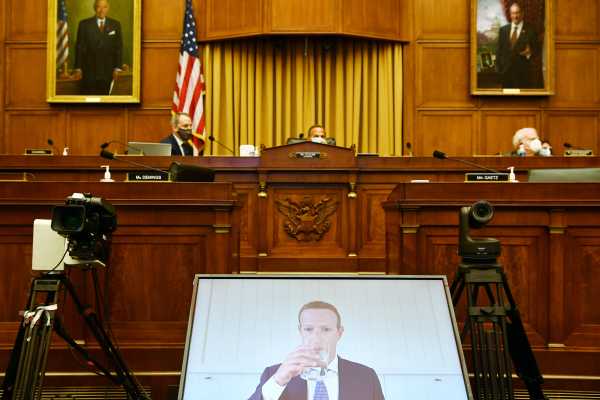 Wednesday’s congressional antitrust hearing was a historic occasion, offering Congress a chance to grill four of the most powerful men in the world, who control four companies — Facebook, Apple, Amazon, and Google — each so massive that they rival nation-states in their power. Observers have grown increasingly concerned about the unprecedented and outsized impact of these companies on the economy, the millions of American citizens who use their products, and the thousands of smaller businesses that try, often unsuccessfully, to compete with them.

But the Republican members of the hearing instead primarily focused on one specific thing: unfounded claims that tech companies are biased against conservatives.

“I will just cut to the chase. Big tech is out to get conservatives. That’s not a suspicion, that’s not a hunch, that’s a fact,” said Rep. Jim Jordan (R-OH), who from the onset of the hearing led Republicans on the committee in questions about anti-conservative bias. At one point, he repeatedly yelled at a Democratic colleague, Rep. Mary Scanlon, interrupting her allotted questioning time because he took offense to her implication that his focus on anti-conservative bias was promoting “fringe conspiracy theories.”

It’s not surprising that many Republican committee members chose to focus on supposed tech bias. But it is a significant distraction from what really matters: whether tech companies have used their power to crush their competition and exploit users’ online behavior and data in a manner that hurts Americans of all political persuasions.

Allegations that social media platforms have an anti-conservative bias has for years been a rallying cry of President Trump and the Republican party. And leading up to Wednesday, Republicans attacked the focus of the Democrat-run House Judiciary subcommittee hearing — calling on it to focus more on anti-conservative bias and for Twitter CEO Jack Dorsey to appear. Twitter is a small company compared to, say, Facebook, but it has recently taken measures to moderate President Trump’s posts for violating policies around misinformation and hate speech, enraging Republicans.

Democrats, meanwhile, tried to steer the conversation back to issues more directly relevant to antitrust, like if and how these companies intimidate their competition, such as when Facebook acquired its then-rival Instagram in 2012; or whether these companies exploit their users’ privacy, like how Google tracks individuals’ online browsing across the web with cookies; or if Apple is shutting out its competitors by taking an unreasonable cut of profits coming in from independent app developers in its App Store.

What really matters here is whether these companies’ business practices are ultimately harming consumers, most of whom have no choice but to use Big Tech in one way or another if they want to do basic things online like search the web, order goods, or stay in touch with their friends.

In an earlier era, Republicans and Democrats on the committee might have come together to try to focus on what’s been seen as an area of relative bipartisan agreement: protecting the free market. That didn’t happen at today’s hearing. Instead, it was a display of partisan divides.

While it’s true that many rank-and-file corporate employees at Facebook, Google, and Apple — who tend to be college-educated individuals living in major metropolitan areas — identify as politically liberal, like many others in their demographic, there’s no definitive proof that Facebook, YouTube, Google, or any other major tech platform discriminates against conservative content.

In their testimony, Republicans at Wednesday’s hearing cited investigations from right-wing news outlets and groups, like Project Veritas and Breitbart News, but at most, these sources seem to indicate that many Big Tech employees hold liberal political beliefs — a phenomenon that is neither illegal nor inherently conspiratorial.

Historically, the types of content and pages that consistently perform well on Facebook are often right-leaning news and pundit pages, like Breitbart News and Ben Shapiro. And as my colleague Peter Kafka wrote this spring, these same tech companies often face criticism from Democrats over how their platforms incentivize users to post polarizing and politically extreme content because their algorithms prioritize engagement — and polarizing content is good at getting users to engage with it.

After Jordan used his initial allotted round of time for questioning Google CEO Sundar Pichai about alleged anti-conservative bias (based on leaked emails from a former Google marketing executive which said the company used its products to reach Latinos with voting information in the 2016 presidential election), he twice interrupted Democratic colleague Rep. Mary Scanlon (D-PA) to yell at her across the floor — initiating a screaming match with Democratic subcommittee chairman David Cicilline, who tried to maintain order.

Jordan reacted this way after Scanlon said she would like to focus her questioning back on antitrust issues instead of what she called “fringe conspiracy theories.” After Cicilline’s repeated calls for order — and after another person on the congressional floor, unidentifiable from the livestream, yelled at Jordan to “put your mask on!” — Jordan let up and let Scanlon continue questioning Amazon CEO Jeff Bezos with her allotted time.

The entire debacle was another reminder that today’s hearing is mostly a political spectacle, a moment primed for soundbites, and many Republicans at the hearing chose to use their time with these powerful company leaders to promote their own political agendas. Congressional hearings like this one aren’t expected to directly lead to antitrust action, but they can help set the stage for that when politicians strategically use their time to extract answers from leaders with pointed — and unified — lines of questioning.

Ranking Republican James Sensenbrenner did offer a narrow window of measured optimism for bipartisan cooperation toward the end of the hearing. He said that antitrust probes hold a meaningful and historic place in American government but that, in the case of tech, regulators need to revisit old decisions and step up enforcement of existing laws rather than write a whole new set of rules.