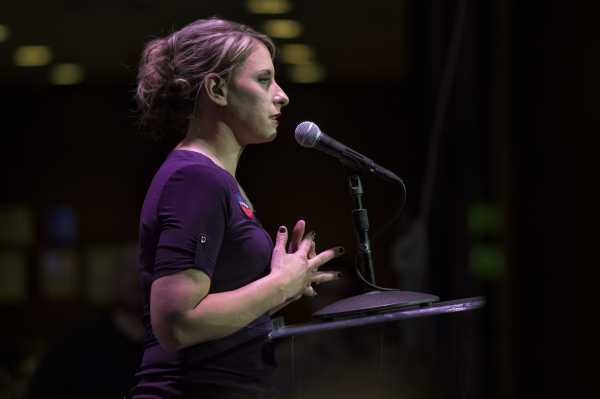 Rep. Katie Hill, a first-term Democrat from California, has been accused of having a sexual relationship with her legislative director, as well as with a young staffer on her campaign.

The story is a complicated one. The allegations first surfaced on RedState, a conservative website known for its devotion to President Trump. Last week, the site reported that Hill and her husband had, until recently, been involved in a sexual relationship with a staffer in her 20s who worked on Hill’s campaign. The story included explicit images purporting to be of Hill and the staffer.

Then, earlier this week, the site published what it said were text messages between Hill’s husband, Kenny Heslep, and the staffer that suggest the staffer was abused in the relationship.

Meanwhile, RedState has also reported that Hill was having an affair with her legislative director, Graham Kelly.

Hill has denied having a sexual relationship with Kelly but she has not said whether she had a relationship with the staffer. She has, however, said the images published by RedState were released without her consent and implied that Heslep, with whom she is in divorce proceedings, might be responsible.

“The fact is I am going through a divorce from an abusive husband who seems determined to try to humiliate me,” Hill said in a statement to the Post.

The allegations against Hill are serious. As the Washington Post notes, it is against the code of conduct adopted by Congress last year for legislators to engage in sexual relationships with their staff. The code does not cover campaign staff, but many advocates say there’s a fundamental problem with an employer having a sexual relationship with an employee. There are “inherent power dynamics involved with superiors and their subordinates, which makes the issue of consent difficult,” Ally Coll, co-founder of the anti-sexual harassment organization The Purple Campaign, told Vox.

The texts hinting at abuse make the allegation even more troubling. At the same time, if Hill is correct, the allegations may have emerged as part of what was essentially an act of revenge porn: It is illegal in California, Washington, DC, and elsewhere to try to hurt someone by distributing naked photographs of that person without consent. Meanwhile, the fact that Hill is one of the first openly bisexual members of Congress may be contributing to the way the allegations have been portrayed. RedState’s headlines, for example, appeared to stoke salacious interest in the story by referring to Hill’s alleged “2-Yr Throuple Relationship.”

Hill is not the first woman to be accused of sexual misconduct or inappropriate relationships in recent years, and the allegations are the latest reminder that such misconduct is not only the province of powerful men. However, they’re also a reminder that the gender and sexual orientation of the person accused have an effect on how allegations come to light and how the media responds.

Hill is accused of having sexual relationships with two staffers, one in Congress and one on her campaign

Hill, 32, beat Republican incumbent Steve Knight in 2018 to represent California’s 25th Congressional District, which spans parts of Los Angeles and Ventura counties. She was part of a congressional class that included a record-breaking number of women, as well as a number of historic firsts. As reporter Michelle Ye Hee Lee notes at the Post, she is also one of the first openly bisexual people to serve in Congress.

She is “considered a rising star among the Democrats,” Lee writes, and is one of the “Big Six” first-term members of Congress to serve in major leadership roles. But Hill has faced scrutiny since last week, when RedState reported that she and her husband had been involved in a relationship with a female campaign staffer, beginning in 2017 and ending after Hill moved to Washington in 2019.

The site posted photos it says depict the women together, with the face of the staffer, who has not been named, blurred out. In one of the images, a woman identified by RedState as Hill is nude.

In a follow-up story, RedState published texts purportedly between the staffer and Hill’s husband, Heslep, alluding to abusive behavior in the relationship.

“It was a dark time and you treated me really poorly but I also stayed which I have to own,” one of the texts, purportedly from the staffer to Heslep, reads.

According to RedState, Heslep replied, “Don’t take full responsibility for staying with people that are abusing you. That is basically victim blaming, and none of it was your fault.”

In one text to the staffer, Heslep referred to “katies abuse,” according to RedState. And in another, the staffer referred to a hobby she enjoyed, according to the website: “She can ruin politics, take all my friends, and isolate me, but she can’t have [this].”

Meanwhile, RedState also reported that Hill had been involved in a year-long affair with her congressional legislative director, Kelly, which caused her husband to file for divorce.

Hill has not yet responded to a request for comment from Vox, but she said in a statement to the Post on Tuesday that “allegations that I have been involved in a relationship with Mr. Kelly are absolutely false.”

“I am saddened that the deeply personal matter of my divorce has been brought into public view and the vindictive claims of my ex have now involved the lives and reputations of unrelated parties,” the statement continued.

Hill has not addressed allegations of her relationship with the female campaign staffer. However, she said in the statement that “intimate photos of me and another individual were published by Republican operatives on the internet without my consent.”

The allegations could have serious consequences. They’re not necessarily being treated seriously.

Regardless of how the allegations came about, they could have serious consequences.

Last year, the House adopted new ethics rules barring members from having sexual relationships with staffers. The rules don’t explicitly apply to campaign staffers like the one allegedly involved in a previous relationship with Hill and Heslep, but, Lee reports, the House Ethics Committee has determined it has jurisdiction over “misconduct relating to a successful campaign for election to the House.”

In general, “it is best practice for organizations to prohibit romantic relationships within either a direct or indirect reporting relationship,” said Coll, who co-founded the Purple Campaign after speaking out about her own experience being groped by a senator when she was an 18-year-old intern. A relationship with a boss can put pressure on the subordinate to consent, Coll said, as well as creating an “appearance of impropriety or favoritism” that affects others in the workplace.

And when the employer is a politician, allegations of sexual misconduct — and how they’re handled — matter to voters, Coll said. “Research shows that more than half of voters say that they would not vote for somebody who is accused of sexual harassment, or, more importantly, somebody who did not make addressing sexual harassment a priority,” she explained. “People, myself included, want to see lawmakers lead by example, and I think that starts with taking responsibility for their own offices and their own campaigns.”

Even before the allegations became public, Hill was expected to have a difficult reelection campaign in 2020, according to the New York Times.

The allegations against Hill come after multiple members of Congress, including Sen. Al Franken (D-MN), have resigned amid accusations of sexual misconduct. The ethics rules last year were part of a broader reckoning with that reality, which also included legislation to make it easier for staffers to report misconduct.

While the only members of Congress to resign after allegations have been men, Hill is not the first powerful woman to face such allegations in recent years. California State Assemblymember Cristina Garcia, for instance, was accused last year of groping a male staffer. An investigation failed to corroborate the claims but found that she had used vulgar language, and Garcia, who had been honored as a “silence breaker” in the Me Too movement by Time magazine, was removed from her committee memberships.

Meanwhile, the fact that Hill is bisexual and a woman may have impacted the way the allegations against her have been covered and received by the public. The headlines and stories on RedState focused on her sexual orientation and relationship status, with headlines including “Bisexual Rep. Katie Hill Allegedly Left Her Husband For Her (Male) Finance Director” and “CA Rep. Katie Hill Allegedly Involved Female Staffer In 2-Yr ‘Throuple’ Relationship.”

Other conservative outlets are leaning hard on the “throuple” angle, with the Washington Examiner titling a story “Swing district: Katie Hill 2020 rivals seize on leaked naked ‘throuple’ photo as campaign issue,” and Fox News reporting, “Rep. Katie Hill fights back amid claims she was involved in romantic ‘throuple’ with staffer.”

Among ordinary internet users, “throuple” was the top Google search term linked to Hill’s name this week, with “photos” and “uncensored” close behind, indicating that people are searching for the story in the hope of seeing Hill naked. This is, to put it mildly, not how the allegations against Sen. Franken were received.

All told, the story of Hill and her alleged relationships with staff is disturbing in a number of ways, from the very real abuses of power of which she is accused to the way those accusations are being conflated with Hill’s sexuality and a salacious desire for nude photos of her. It’s a reminder both that men aren’t the only ones who can engage in sexual misconduct and that coverage of the issue is just as vulnerable to sexism, homophobia, and biphobia as any other topic.

Five Rockets Strike Near US Embassy in Baghdad – Reports