Home Technology The metapolitics of Medicare-for-all 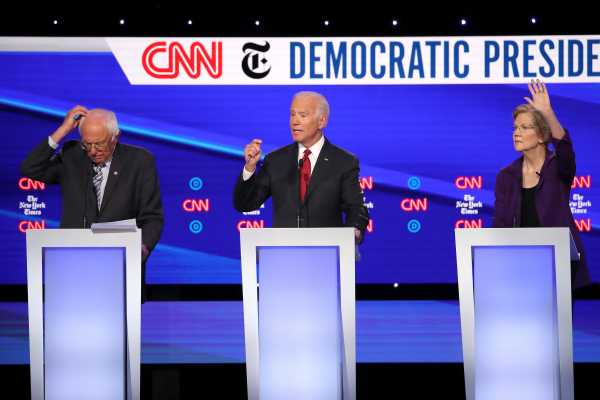 Last week, Sen. Elizabeth Warren revealed her plan to finance Medicare-for-all without raising taxes on the middle class. This kicked off a series of arguments about whether her cost assumptions are realistic and whether her financing decisions are ideal. Sen. Bernie Sanders said one of his proposed approaches is “more progressive.” Joe Biden’s campaign called it “a new tax on employers of almost $9 trillion.” Pete Buttigieg called her math “controversial.”

These are worthwhile arguments, but they’re downstream from the true disagreement, the one that is shaping all these plans. The fundamental question dividing Warren and Bernie Sanders from the rest of the field, and even from each other, isn’t how you pay for health care reform, it’s how you pass it.

Are you likelier to pass some kind of health reform by arguing for the biggest, boldest, least-compromised plan imaginable? Or does starting that way guarantee total failure and possibly grease Donald Trump’s path to reelection in 2020?

This, more than anything, is what the Democrats are actually arguing about. Every single Democratic candidate wants to cover every single American with high-quality health insurance. Every one of them believes America would be better off if we had a national health care system along the lines of what we see in Canada and Germany and the Netherlands and Japan. But many of them believe proposing a total overhaul of the entire American health care system makes it likelier that Democrats end up with nothing. The only health care bill that will make anyone’s life better is the one that actually passes.

What Sanders and Warren have done, skillfully, is to frame this as a difference in ideal policies. They want to cover every single American. The other Democrats don’t. The Biden/Buttigieg/Klobuchar/Bennet/Delaney/Bullock/etc. axis basically regard that as slander. They think their plans will cover more people than Sanders/Warren because their plans can pass, while Sanders/Warren will end up covering nobody because their plans will be ripped apart. It’s an argument that matters for far more than just health care.

The case for caution

Here’s the argument: The American public wants better health care but history has shown, over and over again, that they fear radical change. If you begin with a plan that triggers that fear rather than quelling it and that unifies the entire medical industry and most of corporate America against you, you’ll end in total defeat — as happened when Vermont tried to move to single payer in 2014 and when Colorado tried in 2016 and when Bill Clinton proposed a far-reaching overhaul of the health system in 1994.

The American political system is built to make radical change nearly impossible and the history of health reform reflects that truth: grand ambitions get dashed, piecemeal reforms occasionally succeed. ClintonCare failed, but Obamacare, which was far less ambitious, passed. Single-payer has repeatedly failed, but Medicare and Medicaid passed — and even they began as more compromised programs than people remember (Medicare, for instance, didn’t cover prescription drugs, while Medicaid covered only a small fraction of those who are eligible today).

The moderates note that every Democrat running for president who represents a purple or red state supports a more incrementalist approach. It seems likely they know something about their own voters. And it’s not just the ones running for president: House Democrats who represent swing districts tend to be cool toward Medicare-for-all, and because of that, Speaker Nancy Pelosi says Medicare-for-all is a nonstarter. Similarly, the key Senate Democrats have made clear what they think can pass, and it stops far short of single payer. Sanders’s Medicare for All bill has 14 co-sponsors, but what’s become clear throughout the primary is that many of those co-sponsors — like Cory Booker and Kamala Harris — don’t actually support it as currently written.

So, ask the moderates, what on earth is the point of running for president on an easy-to-demagogue government takeover of American health care that doesn’t even have support among congressional Democrats?

The case for total overhaul

The Sanders/Warren/single-payer supporter rebuttal is threefold. First, as Warren likes to say, “you don’t get what you don’t fight for.” There’s a long-standing view on the left that Democrats get less because they demand less, and that they end up with uninspiring policy because they spend so much time compromising with themselves. Then they wonder why their supporters don’t show up in the next election.

Second, single-payer supporters believe the central obstacle to single-payer is that politicians and pundits paint it as radical and emphasize public opposition rather than focusing their fire and coverage on the inequities of the current system. In this telling, the opposition to radical reform reflects the rhetorical and political choices of leaders, not a fundamental truth of public opinion or American political institutions. If you can move “the Overton window,” you can pass the policy.

Third, both Warren and Sanders believe, to different degrees, in a class mobilization theory of politics: You focus on policies that will inspire your supporters and make clear who’s side you’re on in the class war. Yes, that has the effect of unifying industry against you, but that’s a feature, not a bug: It’s in making clear who your enemies are that you convince your supporters you’re truly on their side.

The rhetorical ambition of the Sanders/Warren camp can sometimes make it seem like they reject all compromise. But Warren and Sanders serve in the Senate. They’ve watched legislation pass. They know you don’t get everything you want. But they believe that if you start by asking for everything you want, you may end up with 70 percent, while if you start by asking for 70 percent of what you want, you’re going to end up with 40 percent.

The moderates think this mechanical understanding of the cost of legislative compromise is a mistake. The key mistake, in their view, is that it assumes passage and ignores the chance of failure. But in Congress, the likeliest outcome is always failure.

If President Bernie Sanders sends House Democrats his single-payer proposal and what follows is months of Democratic infighting followed by that proposal dying as moderate members refuse to support it, the next step isn’t a 70 percent compromise but the total collapse of the effort — the 1994 scenario, in other words. If you start with something that splits your own party and unifies the opposition, you’ll lose before you ever get to the final bargaining rounds. Begin by demanding 100 percent, in other words, and you’re likelier to end with zero percent.

So far, I’ve grouped Sanders and Warren together, but these questions even split them. Warren, in particular, has designed her financing plan around accepting the idea that anything that can be called a middle-class hike is politically lethal and that Medicare-for-all needs to be financed purely by new taxes on the rich and corporations, even if that means leaving in place a costly and inefficient system of employer-based financing.

Sanders, by contrast, has long believed that Americans will support European-style taxes in return for a European-style social welfare state, and that’s an argument that Democrats can win if only they make it. As my colleague Matthew Yglesias writes, these differing beliefs have led them to embrace policies that invert their reputations: “In this case, Sanders is the one putting more emphasis on technocratic soundness, while Warren seems more attuned to populist politics.”

Adam McKay on the Veracity of “Vice” |

A year after his confirmation hearing, Brett Kavanaugh faces a new...