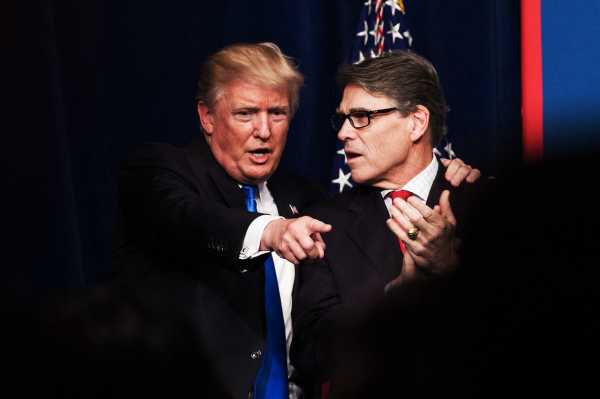 The past 48 hours in Trump impeachment inquiry news, explained

Share
All sharing options for:
The past 48 hours in Trump impeachment inquiry news, explained

The Trump-Ukraine scandal (which still doesn’t have a good name and now encompasses countries other than Ukraine) continued to sprawl over the weekend, with significant new developments on several new fronts, none of which were good for the president.

First off, the initial whistleblower who helped bring this whole saga to public view is no longer alone. At least one more whistleblower, who reportedly was a firsthand witness to events related to Trump’s Ukraine dealings, has spoken to the intelligence community inspector general and retained legal representation — but we don’t yet know what he or she has to say. 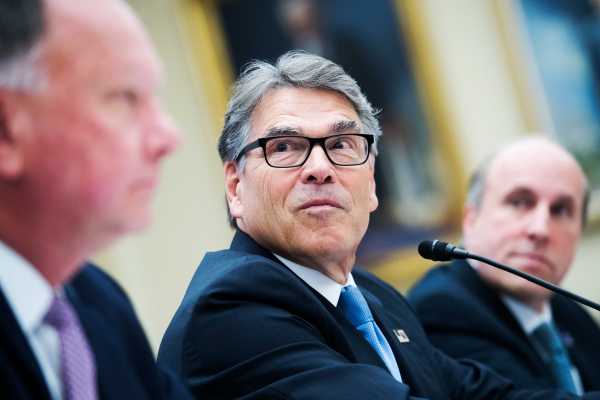 Second, there’s been increased scrutiny on Secretary of Energy Rick Perry’s role in the scandal — particularly because President Donald Trump himself appeared to throw Perry under the bus in a call with Republican lawmakers. According to Axios, Trump said he only had his now-infamous July 25 phone call with the Ukrainian president because Perry asked him to.

And finally, what began as an abuse of office scandal now may be sprawling into an old-fashioned financial corruption scandal too: A new Associated Press story revealed that entangled in all this, there is an effort by Trump allies to get rich off natural gas deals in Ukraine.

A second whistleblower has come forward

As you no doubt recall, this whole scandal was kicked off by a whistleblower who filed a complaint about Trump’s conduct related to Ukraine back in August. We don’t know the person’s identity, but according to the New York Times, he is a male CIA officer.

Since then, a big part of Trump’s effort to defend himself has involved attacking that whistleblower — including by pointing out that his complaint wasn’t based on firsthand information, but rather what he had heard from other government officials.

That was an unconvincing criticism to begin with, because the whistleblower’s secondhand information has proven to be quite accurate (for instance, the White House’s summary of Trump’s July call with the Ukrainian president quite closely matched the whistleblower’s description). Additionally, once the complaint was filed, an inspector general interviewed other sources to try and corroborate the allegations, and concluded the complaint was credible.

In any case, though, the wrangling over the initial whistleblower is about to become less important — because a second whistleblower, who reportedly has firsthand information, decided to come forward this weekend.

On Friday, the New York Times’ Michael Schmidt and Adam Goldman reported that a second whistleblower — another intelligence official, with “more direct information” — was weighing whether to come forward.

And then, on Sunday, the attorneys for the first whistleblower — Andrew Bakaj and Mark Zaid — announced that they were now representing at least one more.

But how many more? Zaid tweeted that the team represents “a second whistleblower” with “first hand knowledge.” That person has not yet filed a formal complaint, but he or she has talked to the inspector general for the intelligence community about the matter.

So what we know is that Bakaj and Zaid are now representing at least two whistleblowers. Whether there are actually even more than that — or whether their use of “multiple” is just caginess — remains to be seen.

It’s also unclear just what the additional whistleblower has to say, and when Congress or the public will learn what it is. But given how quickly this story has moved so far, it probably won’t take too long.

Meanwhile, a Trump administration official was thrown under a metaphorical bus this weekend. The victim was Secretary of Energy Rick Perry, who Trump now seems to be suggesting bears some blame for this whole scandal.

On Saturday, Axios’s Alayna Treene and Jonathan Swan reported that Trump had a conference call with House Republicans on Friday, and repeated his now-standard defense of his call with the Ukrainian president, saying it was “perfect.” But then Trump went and brought up Perry.

Perry has been hanging around the outskirts of the Ukraine scandal for a few weeks now. But toward the end of last week, news got out that Perry planned to step down from Trump’s Cabinet before the end of the year.

A long-time Republican political figure, Perry served as governor of Texas for 14 years and ran for president in both the 2012 and 2016 cycles. In that latter campaign, he attacked rival candidate Donald Trump as a “cancer on conservatism.” But then Trump won, and nominated Perry, a staunch ally of fossil fuel interests, as his energy secretary.

Now, the Energy Department’s budget is mainly devoted to maintaining the US nuclear weapons arsenal, cleaning up nuclear waste, and handling basic science research. But, unusually for an energy secretary, Perry has thrown himself into an international dealmaking role. Per Politico’s Anthony Adragna and Ben Lefebvre, he’s been an “aggressive advocate for U.S. energy companies to sell their natural gas to Eastern Europe,” and helped strike a gas export deal with Poland and a coal export deal with Ukraine. 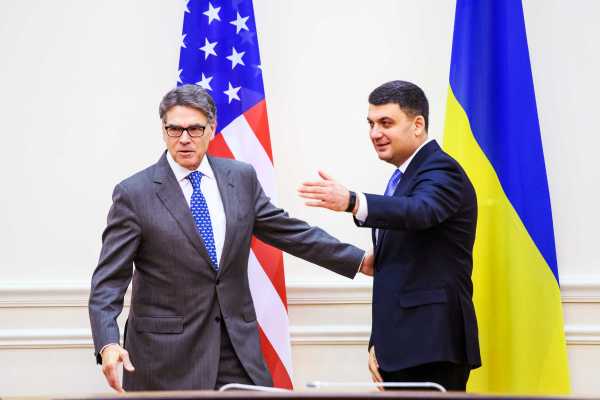 Perry was mentioned in the initial whistleblower complaint, albeit briefly. After Volodymyr Zelensky won the Ukrainian election in April, Trump ordered Vice President Mike Pence to cancel his planned trip to attend Zelensky’s inauguration — and said Perry should go instead. Perry is also said to have worked closely with State Department officials Kurt Volker and Gordon Sondland on Ukraine issues (Volker and Sondland exchanged damning texts about Trump’s pressure campaign on Ukraine).

Naturally, all this raises questions about whether Perry himself was involved in Trump’s effort to get Ukraine to investigate his political opponents (as Volker and Sondland were). Sen. Bob Menendez (D-NJ), the top Democrat on the Senate Foreign Relations Committee, has already sent Perry a letter with several questions. But that’s not all there is to the Perry story …

Throughout the Ukraine scandal, Trump has professed that all he was trying to do was fight “corruption” — by which he meant, the purported corruption of the Biden family related to a Ukrainian gas company.

Yet it turns out that Trump’s allies were also trying to get rich from a Ukrainian gas company this year, according to a new story from the Associated Press’s Desmond Butler, Michael Biesecker, and Richard Lardner.

“[A] circle of businessmen and Republican donors touted connections to Giuliani and Trump while trying to install new management at the top of Ukraine’s massive state gas company [Naftogaz],” the AP team writes. “Their plan was to then steer lucrative contracts to companies controlled by Trump allies, according to two people with knowledge of their plans.” 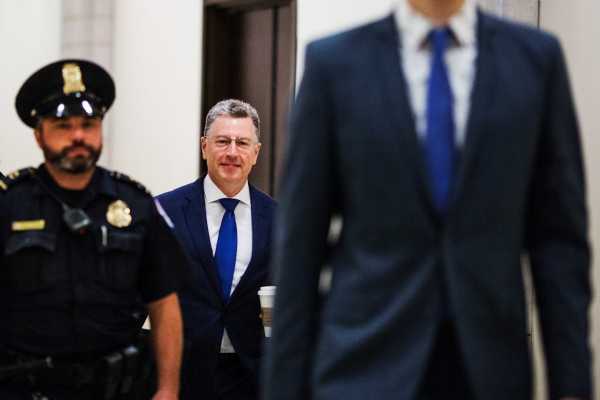 Perry reportedly played a role in this — during his trip to Kyiv to attend Zelensky’s inauguration in May, he met privately with Zelensky and other Ukrainian officials, and urged them to fire Naftogaz advisory board members. Per the AP, Perry implied that two Texas businessmen would be good choices for for the new board. He also suggested that a current American representative, a former Obama official, be replaced by someone “reputable in Republican circles.”

Meanwhile, allies of Trump lawyer Rudy Giuliani had similar ideas. As is now well known, Giuliani has been fixated on Ukraine for the past year, and has tried to get the government to launch investigations into the Bidens and the 2016 election. And he’s had two questionable characters with him every step of the way: Lev Parnas and Igor Fruman.

Parnas and Fruman are both Soviet-born but have since become US citizens. The two entrepreneurs have a history of legal trouble (they’ve been sued by investors), and gave hundreds of thousands of dollars to a pro-Trump group in 2018. They have lately acted as “fixers” of sorts for Giuliani in Ukraine. They may even be paying Giuliani — the former New York City mayor described Parnas and Fruman as his “clients” in May.

But what was in it for the fixers? According to this AP report, they were fixated on Naftogaz as well — in March, they were trying to push out the company’s CEO, and they had hatched a plan to export US liquified natural gas to Ukraine as well. Giuliani claims he was never involved in their Ukraine dealings (though he says he was involved in potential Uzbekistan deals). But Parnas and Fruman did eventually manage to make their pitch to Perry.

The full story remains murky, but it’s looking more and more like, in addition to an abuse of office scandal, there’s an old-fashioned corruption scandal too — there was money to be made in Ukraine, and Trump’s allies wanted to make it.

Our podcast explains how Ukraine finds itself at the center of the American political drama, yet President Trump is the least of the country’s worries.

Looking for a quick way to keep up with the never-ending news cycle? Host Sean Rameswaram will guide you through the most important stories at the end of each day.

Subscribe on Apple Podcasts, Spotify, Overcast, or wherever you listen to podcasts.

China Voices Readiness to Pay ‘Any Cost’ in Trade War

Why some US cities are opening safe spaces for injecting heroin