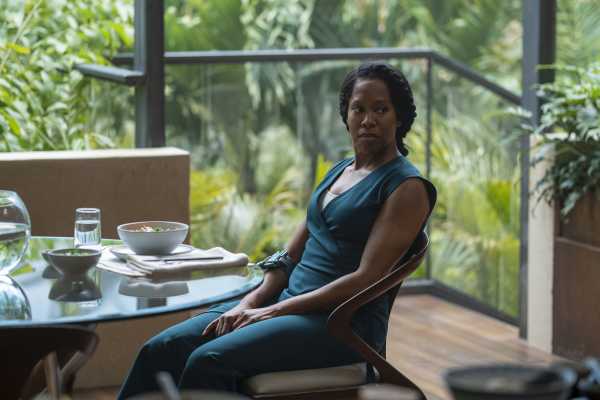 Sometimes HBO reminds us, in the best way possible, that its take on Watchmen is a comic book show after all. Episode seven is a prime example of how a well-executed plot twist can change everything that we thought we knew and make us re-watch and re-think everything all over again.

After a week to breathe and ruminate on the repercussions of episode six’s big reveal — that Angela’s grandpa Will Reeves was the pioneer hero known as Hooded Justice — the show hit a lever and plunged us down another narrative trap door.

Angela’s husband Cal is actually Jon, as in Jon Osterman, a.k.a. Doctor Manhattan, and Angela knew this entire time.

As Lady Trieu informs Angela, full blown amnesia, which Cal suffers from, is quite rare. She hints that there’s something more beneath the surface of Angela’s doting and loyal husband.

Angela bludgeons Cal to death with a hammer, and digs a tiny device from his bashed-in skull. She needs to “wake up” Jon. Desperate times call for desperate measures.

The 7th Kavalry, a.k.a. Cyclops, spearheaded by Senator Joe Keene, is launching an attack that they hope will give them the powers of Doctor Manhattan himself. They want to restore balance and power to white men. How exactly they’re going to go about doing this is anyone’s guess, but Angela and Jon are in imminent danger.

Some Watchmen fans are mad that HBO’s version is political. But Watchmen has always been political.

While Jon’s identity as Cal caught me and likely my fellow viewers by surprise, the show gave us some major hints in previous episodes that the comic’s omnipotent blue being was masquerading as Angela’s amnesiac husband.

The only question left unanswered, though, is: why? 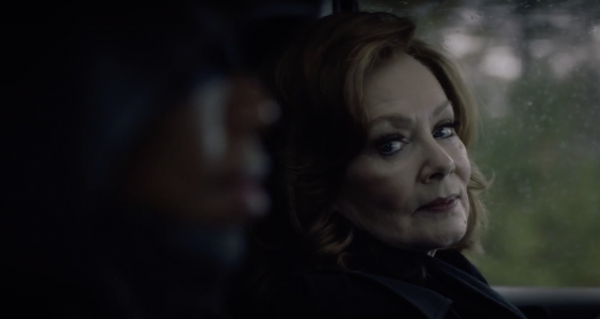 The writing may have been on the wall as far back as the first half of the season. Back in episode four, Laurie Blake has a conversation with Angela on their way to Lady Trieu’s headquarters as the pair investigate Judd Crawford’s death. Laurie starts talking to Angela pretty casually about her ex, and then says something that makes Angela sit straight up.

“My ex used to talk about them [thermodynamic miracles] when he wasn’t distracted by fucking quarks,” Laurie says, talking about the miraculous feat of science that allowed Angela’s car and Will to be taken up into the sky. “Yeah, well, he’s no Cal.”

“Cal, your husband. I saw him today. We had a nice chat,” Laurie says. “You guys met in Vietnam, right?”

In the context of our new revelation about who and where Doctor Manhattan is, the meaning behind this conversation changes. Originally, you could read it as Angela being annoyed by Laurie’s lack of boundaries and prying into her personal life. That interpretation doesn’t change when re-watching this conversation after episode seven, but now that we know Angela is keeping Doctor Manhattan in a human suit, it adds another layer of shock that Laurie in particular interviewed Cal — she was Doctor Manhattan’s old lover, after all. 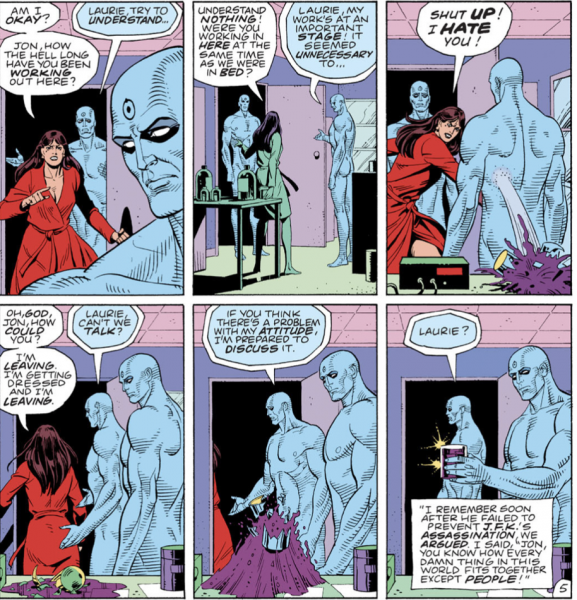 In the comic books, Laurie is Doctor Manhattan’s primary love interest. She loves him, but their relationship is strained because he begins to transcend humanity. Granted, anyone transcending their own humanity might be emotionally unavailable, but in Jon’s case, his powers and near-omnipotence make him feel like he’s become an outsider to humanity. He can’t empathize with humans, because he’s become something more powerful, more knowing, and more than human.

Cal has no backstory, beyond meeting Angela in Vietnam 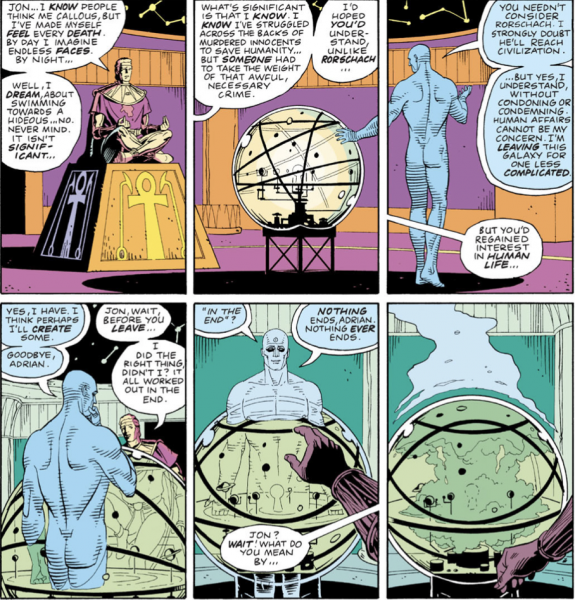 In the original comic, Jon leaves the planet after the giant squid attack. Going off of that, it doesn’t really make sense how he and Angela would meet. But while Jon might be off playing God on another planet (which is where I’m betting he left Adrian Veidt, a.k.a. Ozymandias), there is no rule that he has to actually stay on that planet in the show. He could have conceivably come back to Earth at any time.

The show is comparably specific about where Angela comes from, grounding her background in Vietnam. But it isn’t the same Vietnam of our real world. In Watchmen, the United States won the Vietnam War, and the country became part of the United States as a result. That’s why there’s a massive fandom around Jon/Doctor Manhattan as a liberating hero in Vietnam, which we see at the beginning of episode seven when Angela is a little girl. Given that Lady Trieu and Laurie both say that Angela and Cal met in Vietnam, it points to Jon landing in Vietnam for whatever reason, and Angela encountering him while there.

In 1986, Watchmen skewered the way we love superheroes. It’s still as relevant as ever.

So why is Jon in Vietnam, possibly after exiling himself to space? The comic book gives us one clue.

Toward the end of the graphic novel, Laurie finds out that she’s the daughter of Eddie Blake, also known as the supervillain, The Comedian, and the man who tried to rape her mother Sally. Sally and Eddie eventually had a consensual relationship, and Laurie was born. Sally’s forgiveness of Eddie to birth Laurie, believe it or not, is what convinces Jon that humanity is worth saving. He calls the idea of two people who shouldn’t be in love yet find a way, a miracle that takes “the breath away”: 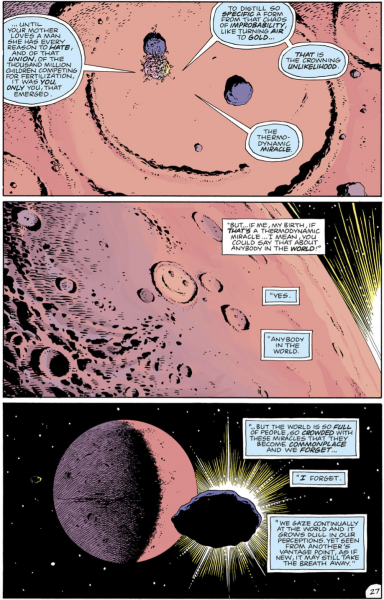 To be clear, the way Moore has depicted women, particularly Sally falling in love with a man who tries to rape her, has been criticized. But the thing to focus on here is that Jon, even in his strange, distant way, can be a little romantic in that he believes in love and has faith in humanity. He could see Angela in this same light — a thermodynamic miracle that comes once in a lifetime that he needs to be with. Finding his soulmate could be just the thing to bring him back from another planet or another galaxy.

Angela and Cal’s kids are adopted with a strange arrangement 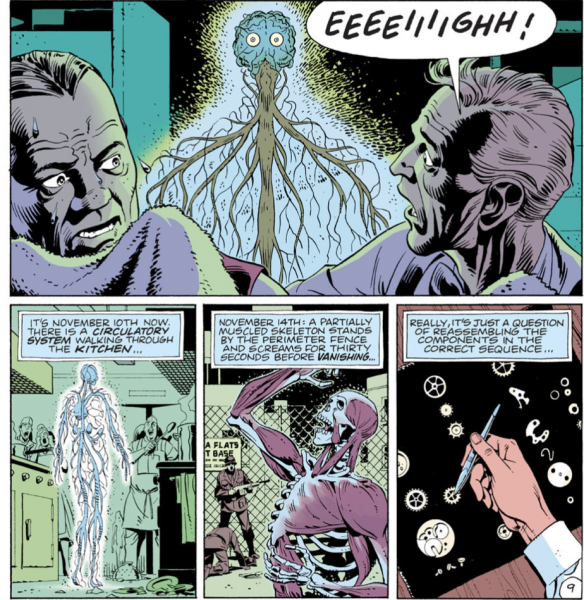 Jon does have the ability to change his size, and when he was vaporized, he displayed the power to change his physiology. This could mean that he and Angela could have children could conceive the way humans do. Though one would think that those children would end up with Jon’s powers or his blue skin, and if that happened, they’d be hunted down by the 7th Kavalry or anyone hungry for Jon’s powers.

It makes sense, then, that she and Jon have adopted children, but they seem to have adopted them through a non-traditional process.

In the third episode, a man shows up on Angela’s porch demanding to see the kids, and she writes him a check and sends him away. The specifics of their deal are unknown, but I’d imagine it’d be difficult for Angela and Cal/Jon to adopt a child, because doing so would require a background check into Jon’s life as well as references. And the latter is difficult to do if Jon has no knowledge of who he really is and more or less has no human past as Cal. Hence, we have Angela working out a shady transaction to adopt children and start her family.

Why is Angela hiding him?

In episode seven, Senator Joe Keene tells Laurie Blake of his plan to capture Jon and steal his powers. Lady Trieu tells Angela more or less the same thing — she needs to save the world from Keene and Cyclops— and Doctor Manhattan is indeed walking the Earth as a human man.

It would then seem that Angela and Jon’s plan to hide Jon in plain sight under the guise of a human amnesiac named Cal was preventative in anticipation of Keene’s grand plan. The comic book might tell us more: 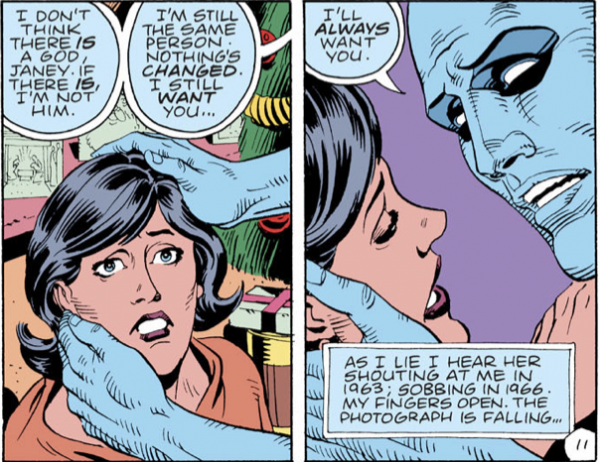 While Jon is essentially omnipotent, he also possesses a type of omniscience. He can see himself at various points in his life at any time. In the panels above, he is having an argument with his ex-girlfriend Janey Slater in 1959. During that argument, he sees himself in the future arguing with her in 1963, and then her lonely and sobbing in 1966.

If Jon were to be with Angela in Vietnam, he would then be able to see his future with her when they move to Tulsa and have a family. He would also be able to anticipate the Cyclops attack that Lady Trieu warns of and Joe Keene confirms, and possibly hiding himself as Cal would be the best option.

The wrinkle in that plan, though, is the “White Night” attack on Angela and her partner that took place before the events of the show. The White Night was when the police force in Tulsa was slaughtered, the act of violence that prompted legislation allowing police officers to keep their faces and identities hidden.

As Angela explained to Topher’s class in episode one, the attack caught her by surprise, and she was shot by 7th Kavalry members. But in the flashback, we see that Angela and Jon/Cal are enjoying themselves on Christmas Eve. Jon’s powers would allow him to see that attack happening, but it’s odd that he didn’t warn Angela.

This relies on the assumption that Angela married Cal knowing he was Jon the entire time versus a possible (but not necessarily one I believe) scenario in which Jon has been impersonating Cal the entire time; Angela may not have been fully informed of Jon’s past and his powers.

This seems to indicate that, while Jon is Cal, his knowledge of himself and his powers are blocked, thus making the attack on Angela and himself possible — he wouldn’t be able to prevent it.

But if Jon and Angela were hiding Jon to avoid Keene’s plan, did the White Night attack alter Jon’s future? Judging from Angela’s desperate response of bludgeoning Cal and waking up Jon after her meeting with Lady Trieu, it seems things are not going according to plan.

There’s also the notion that something happened during the White Night attack that alerted Police Chief Judd Crawford to Jon’s real identity. We now know that Judd staged the attack, but he spared Angela and Jon. Judd probably didn’t call off the attack out of the goodness of his heart — and it seems more likely now, as Keene’s plan of capturing Jon comes into focus, that he found out about Jon and Angela’s secret during the White Night attacks. Perhaps we’ll see this all come together a bit more in episode eight, though I wouldn’t be surprised to be thrown another twist.

‘Put That Impeachment Down!’ Trump Helps Himself to Teasing at Gridiron...