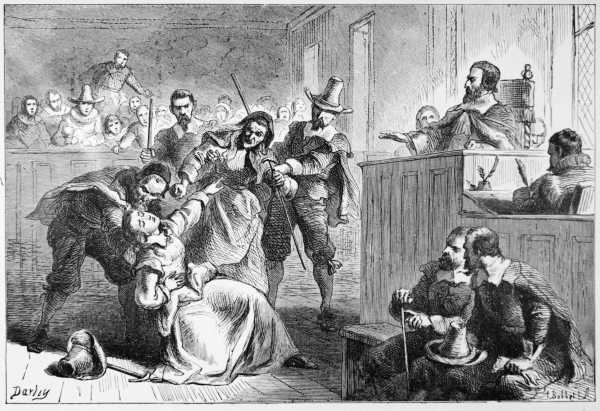 Everything is a witch hunt to President Donald Trump.

First it was Robert Mueller’s investigation into Russian collusion and obstruction of justice. Now it’s impeachment.

In a letter to House Speaker Nancy Pelosi on Tuesday, objecting to the impeachment proceedings that will culminate in a House floor vote Wednesday, Trump wrote: “More due process was afforded to those accused in the Salem Witch Trials.”

It might sound outlandish — people, mostly young women, were literally executed in Salem in the late 17th century — but this is one of Trump’s favorite tropes. In his telling, he is the subject of the greatest political witch hunt in history. He’s often takes the same line to his preferred platform, Twitter.

Trump tweeted about the Mueller “witch hunt” more than 110 times in 2018. He’s since linked the two, impeachment and the Mueller probe, into one big “WITCH HUNT!”

The president became something of a trendsetter. When Missouri Gov. Eric Greitens was facing allegations of horrendous sexual misconduct, he unsubtly said it was “exactly like what’s happening with the witch hunts in Washington, D.C.” The critics of #MeToo — often but not always men — have also compared the campaign to eradicate sexual abuse to a witch hunt.

If you want people to believe you’re wrongfully accused, the subject of malicious scrutiny on the part of your enemies, you cry that you’re the target of a witch hunt.

Trump didn’t pick this phrase out of thin air. Politically, this goes back at least to McCarthyism and Watergate. The Nixon White House also claimed he was the subject of a witch hunt. Critics of Sen. Joe McCarthy’s insidious anti-communist probes called them witch hunts. Back in those days, playwright Arthur Miller made the subtext text with his play The Crucible, an anti-McCarthy allegory set during the Salem witch trials of the 1690s.

Which is where our story really begins. In the modern setting, “witch hunt” is a useful defense because people living in the 21st century know that the “witches” of 17th-century Salem were almost certainly innocent and, therefore, that the persecutions that led to 20 deaths were unjust. It’s a hyperbolic if undeniably powerful rhetorical device to claim one’s innocence.

There is also, once you stop to think about it, something distasteful about men in power — particularly two men credibly accused of sexual assault — using a term that harks back to an era in history in which a patriarchal society wrongfully persecuted (mostly) women.

“We’ve turned the expression on its head. Traditionally a witchcraft charge amounted to powerful men charging powerless women with a phony crime. Now it is powerful men screeching that they are being charged with phony crimes,” Stacey Schiff, who wrote a 2015 book about Salem called The Witches, told Vox over email. “Unfair targeting is the only thing the two have in common, and even that is debatable.”

What exactly caused the mass hysteria in Salem, Massachusetts, in 1692 and 1693 is still a subject that divides historians and others who study the witch trials. What we know for sure is that between 1692 and 1693, 19 people were hanged, and one crushed to death, ostensibly for the civil crime of practicing malevolent witchcraft, after an outbreak of mass hysteria. They had all maintained their innocence — with the exception of Tituba, a local enslaved woman, whose confession may have been tortured out of her.

The majority of the Salem witch trials didn’t actually happen in Salem Town — what is known as Salem today — but in Salem Village, an inland hamlet that was renamed Danvers in 1752.

Mary Beth Norton, a Cornell University professor who wrote 2007’s In the Devil’s Snare with an eye toward explaining the crisis in its historical and political context, connected the hysteria over the witch trials and the actions taken by village elders to Native American attacks on the New England settlers.

She summarized her understanding of the witch trials to Vox like this:

As Norton emphasized, it’s simplistic to think of the Salem trials as purely political: Christians living in New England in the 1690s absolutely believed that witches were real and that they could serve as consorts of the devil to wreak havoc in their town.

But the relevance to our modern understanding of a “witch hunt” is eerie. Sinister authorities using the specter of “witches” to protect their own interests. The deteriorating faith in political institutions. Right from the start, “witch hunts” were imbued with much of the meaning that would make them such a powerful rhetorical tool in 2018.

As a result, Salem has held a prominent place in America’s political imagination ever since.

As Texas Tech’s Gretchen Adams chronicled in her book The Specter of Salem, the witch trials served several political purposes in the intervening centuries. In the 1790s, textbooks would use Salem as the quintessential example of America’s less enlightened past, a history the new nation was abandoning as it embraced Enlightenment ideals in its early years.

During the 1830s, during a religious revival known as the Second Great Awakening, which rejected the Enlightenment, critics would compare those new religious orders to the Salem elders, seeking to remind people of the dangers of unchecked fanaticism. During the Civil War, Southerners would cite the witch trials to attack the Union for its supposed irrationality in persecuting the war.

But for modern politics, the turning point seems to have been Arthur Miller’s 1953 play The Crucible. A retelling of the trials, the play was a coded indictment of the anti-communist hysteria of the 1940s and ’50s. Miller heavily implied that the accusers and magistrates of Salem were motivated by a combination of fear and greed, including a desire to seize the lands of the accused. The story of Salem, for Miller, was the story of any mass panic — how self-interested humans use fear and panic to stoke “witch hunts” for personal gain.

“It’s a 20th-century term that comes into use during the Cold War. There was no single, directed, witch-identifying force in America’s 17th-century prosecutions,” Schiff said. “In that sense, Salem does not actually constitute a ‘hunt.’ It’s more a panic, or an epidemic, or a societal delusion.”

As Vox’s Dara Lind noted previously, Richard Nixon (or his staff) invoked Salem as the Watergate investigation was gaining steam:

The current “witch hunt” claims are both gross and dangerous

Vox’s Lind wasn’t the only one to connect Nixon and Watergate to Trump’s use of the phrase. Carl Bernstein and Bob Woodward cited Trump’s laments of a “witch hunt” as they described the “eerily similar confrontation” that Trump had with Mueller and that Nixon had with special prosecutor Archibald Cox.

On the one hand, Trump comparing the investigation into his campaign to a crisis that left 20 people dead in the 17th century is clearly ridiculous — there is much more evidence in the criminal indictments, the court-sanctioned wiretaps, and the consensus of Republican and Democratic investigators for Russian interference in the 2016 presidential election than there is for witchcraft — and rather unsavory. Not to mention the evidence, often provided by the White House itself, of the Trump administration pursuing quid pro quo with Ukraine to investigate former vice president Joe Biden.

As for Greitens, who so transparently drafted off Trump’s tactics, his use of the term might be even more galling: This is a man accused of coercing a woman into sexual acts and then threatening to blackmail her if she talked.

“There is something twisted, misdirected, and vaguely demented in the cries of ‘witch hunt,’” Schiff said. “Many American women (and a handful of men) did protest their innocence. They were not witches, though the courts decided they were; they hanged all the same. None ever cried ‘witch hunt.’”

But Trump’s never-ending laments of “witch hunt!” can’t just be dismissed. They serve an important function for the president: discrediting his opponents.

It isn’t an accident that Trump’s most influential allies in the media, like Fox’s Sean Hannity deploy the exact same rhetoric.

For now, most Americans still support the impeachment proceedings. Screaming “witch hunt” didn’t save Nixon either — not that we should necessarily believe the Ukraine affair will end the same way Watergate did.

But at the same time, Trump has shored up support among Republican voters and politicians. His “witch hunt” claims have found a particular audience, it seems.

Investigating potential crimes against the country shouldn’t be a partisan issue. But it’s become that way. Trump — and the screams of “witch hunt!” — have helped make it so.

In defense of the New York Times’s anonymous Trump official