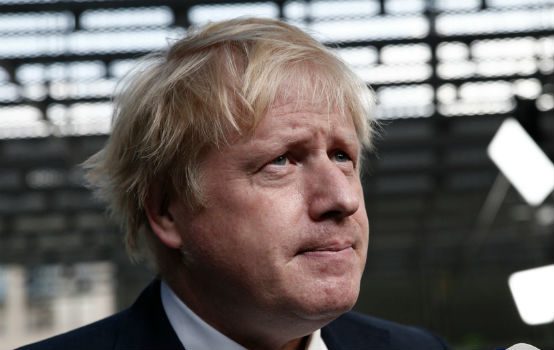 The news that three top officials in Prime Minister Theresa May’s cabinet—including foreign minister Boris Johnson—have resigned in protest over the proposed Brexit agreement is a clear indicator that the May government might soon fall.

According to a Sky News poll, 64 percent of Britons don’t trust May to handle the Brexit negotiations. Indeed, according to the odds-making website PredictIt, as of mid-day July 10, betters saw just a 51 percent chance that she would survive until the end of the year.

In the meantime, these resignations are a bit, as the Brits might say, awkward, coming as they do on the eve of the NATO summit. That conclave is arguably the most important in years, since it will bring the NATO-phobic President Trump together with his NATO-philic “partners.”

Yet in the UK, Brexit eclipses NATO. After all, two years ago, 17.4 million Britons voted “yes” in a referendum as to whether Britain should leave the European Union. Yet now, in the wake of May’s fumbles—and amidst the creepy X factor of what the Russians might have done to boost Brexit and British discord in general—the situation is murky, to say the least. As Johnson wrote in his resignation letter, “The dream of Brexit is dying, suffocated by needless self-doubt.”

Yes, there’s much doubt over Brexit—more now than there was two years ago. In fact, the polling website WhatUKThinks finds that the “Bremain” side has pulled ahead in the last few months; staying in the EU now leads leaving it by five points.

Yet as we survey the uncertainty in the UK, we might pause to note the certainty in the EU. That is, the EU has played its own steady game, seeking to pull the island back to the continent. One could say that it’s been this way since the French Normans conquered England way back in 1066.

That is, over the last few decades, France, operating through the EU, has developed new strategies for tractor-beaming Albion.

Here in the U.S., the EU is often seen as some sort of woolly-headed utopian pipe dream. However, the core of the EU has always been something different—something hard-nosed, not soft-hearted. The EU is ultimately about European greatness, in the spirit of Charles the Great, better known as Charlemagne. And he, of course, was no peacenik.

So it’s revealing that the key honor for the furtherance of European unity is called the Charlemagne Prize, awarded by the city of Aachen, Germany. Since 1950, virtually every great Europhile has been an honoree, including, recently, Angela Merkel and Emmanuel Macron.

Aachen was known as Aix-la-Chapelle back when Charlemagne, the first Holy Roman Emperor, made it the capital of his realm, encompassing most of today’s France and Germany. So we can see: for all their many wars over the centuries, the French and Germans share a common origin story. The Rhine River is a kind of psychic and economic spinal cord, commanding the two nations to mutuality.

Thus the vision of a Franco-German kingdom has always been alive. The only question is, as always, who would take the lead.

In 1914 and 1939, the Germans made militaristic bids for supremacy, and we know how those ventures worked out. Since then, the Germans have learned humility, although, even now, some of the old impulses peep through. For instance, on June 13, German foreign minister Heiko Maas laid out his vision of a “large Europe.” The German economy, Maas argued, benefits enormously from the EU—and surely he’s right about that.

However, the Charlemagne vision extends far beyond mere money. And the Germans, having learned the hard way, fully realize that they can’t be seen as the architects of any ambitious political project.

Thus we come to the French, whom Maas repeatedly singled out for praise. Untainted by German guilt, they are free to use their political skills—and German cash—to rebuild the medieval Carolingian empire.

In fact, the French have long seen diplomatie as their special skill. As Macron’s predecessor in the French presidency, François Hollande, said in 2016, “Through its diplomacy, France means to be at the center of the world.”

Indeed, there’s something in the Gallic mind that turns toward the twists and turns of human nature. Many are familiar with the knowing cynicism of de La Rochefoucauld, the 17th-century Frenchman famous for the mordant epigram. Not surprisingly, much of Rochefoucauld’s wry oeuvre can be applied to the diplomatic arts, viz., “Sincerity is an openness of heart; we find it in very few people; what we usually see is only an artful dissimulation to win the confidence of others.”

A lesser known contemporary was de La Bruyere. His writings were equally cynical, although more actionable, as seen in his essay, “The Sovereign and the State”:

A minister or a plenipotentiary is a chameleon or a Proteus; sometimes, like a practiced gambler, he hides his temper and character, either to avoid any conjectures or guesses, or to prevent any part of his secret escaping through passion or weakness; and at other times he knows how to assume any character most suited to his designs, or which is required, as it may be his interest artfully to appear to other people as they think he really is.

As we know, ideas have consequences, and it’s easy to see the impact of Rochefoucauld/Bruyere-type thinking in subsequent French political triumphs.

Perhaps the greatest of French diplomats was Talleyrand. Born into the Bourbon ancien régime, he soon found himself in the service of the Revolution, and then when that allegiance turned south he reingratiated himself with the restored Bourbon monarchy. Asked about his loyalty switches, Talleyrand responded with a shrug: “Treason is a matter of dates.”

Talleyrand’s apogee came in 1814, at the Congress of Vienna. France had just lost the Napoleonic Wars, and so at the subsequent peace conference, it seemed the French would have few, if any, cards to play. Yet Talleyrand nevertheless figured out how to divide the victory coalition. That is, he pitted the two most reactionary powers, Russia and Prussia, against the two more liberal—or at least less reactionary—powers, England and Austria.

Talleyrand even managed to sign a secret treaty with those latter two powers. As he wrote with relish to his new master Louis XVIII, “The coalition is dissolved…France is no longer isolated in Europe.” As Rochefoucauld, an obvious spiritual predecessor to Talleyrand, put it in his day, “There are no accidents so unfortunate from which skillful men will not draw some advantage.”

Later in the 19th century, the French used their finesse once again to squeeze advantage out of adversity. Having been badly defeated by the Germans in 1871, France over the next two decades lured away two German allies, Britain and Russia. Thus was created the Triple Entente that staved off French defeat in World War I.

Next, in 1945, France, having been humiliated in battle by the Nazis, nonetheless prevailed in the peace: they managed to wangle their way onto the UN Security Council. The French may never regain la gloire on the battlefield, but they can win big in the conference room.

Given all this history, we shouldn’t be surprised that the EU’s chief negotiator on Brexit these past two years, Michel Barnier, is French. And Barnier’s godfather, of course, is Emmanuel Macron, a young man (born in 1977) with a wise old soul. In the spirit of Talleyrand, Macron has managed to keep good relations with both of the current political factions in America—pro-Trump and anti-Trump—even as he nurtures his power base in Europe.

Macron is, indeed, Protean: as this author has argued here at TAC, at any given moment, he is both left and right. We might consider, for instance, the hot-button issue of immigration, which now threatens to undo the EU. In one breath, sounding positively global, Macron says that the EU and Africa have a “shared destiny.” That sounds all nice and liberal, and yet in the next breath, Macron urged Africans to stay in Africa and, for good measure, to reduce their birth rates. Indeed, one wonders whether Macron has read Jean Raspail’s dystopic 1973 novel prophesying France’s demographic inundation, The Camp of the Saints—which this author wrote about for TAC back in 2005—even if, obviously, the French leader would never admit to such an un-PC thing.

Where does all this Gallic cleverness leave the British? And Brexit?

Just two months ago at TAC, a keen observer suggested that the emerging solution for EU malcontents—which is to say, many of the 28 member states—is “Remexit.” That’s a play on “Remain” and “Exit,” in which member states stay within the Union, even as they ignore unpopular EU rules, notably on migration and refugee settlement. To be sure, this is rather a muddle-through, but then history is mostly a series of muddles.

In the meantime, Macron and the French—and the Germans, in their reticent way—will continue to dream their heroic dreams of Charlemagne 2.0. And why not? After all, it’s a vision they’ve been cultivating these past 1,200 years.

James P. Pinkerton is an author and contributing editor at TAC. He served as a White House policy aide to both Presidents Ronald Reagan and George H.W. Bush.

What next for Mauricio Pochettino following Spurs exit?