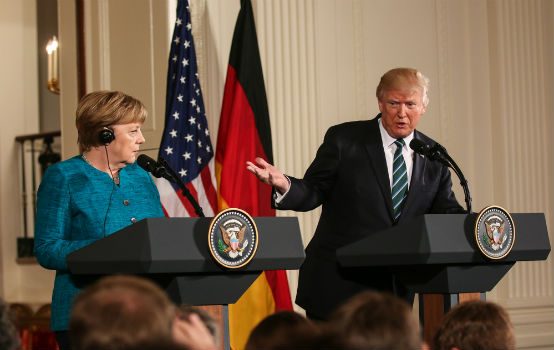 The upcoming NATO summit in Brussels could very well be the most highly anticipated meeting of the transatlantic security body since the organization was founded in 1949.

If that seems like hyperbole, consider the comments from European diplomats and politicians over the last several days. These summit meetings are normally uneventful and boring affairs, a congenial celebration where 29 heads-of-state deliver long-winded speeches about how great NATO is and how instrumental the alliance has been and will continue to be in working towards global peace. Next month’s annual huddle, however, is likely to be far more exciting and anxious. Asked about this possibility, a European diplomat pointed to the uncertainty caused by Donald Trump. “A no-news summit would be a good summit,” this official told Foreign Policy. “But at this point, we’re all scared shitless.”

The Europeans are right to be scared. The White House may release the usual statements reaffirming Washington’s commitment to the alliance, but there’s little question that Trump is not a NATO cheerleader like his predecessors were. The president has called the alliance “obsolete,” a remark that terrified the bipartisan foreign policy community in Washington and continues to follow the president around like a stench. And while Trump might have rescinded that assessment, he is still a critic of the organization’s utility.

Indeed, one of Trump’s favorite pastimes—in addition to throwing shade at Hillary Clinton—is categorizing European governments as cheapskates and freeloaders. During his first speech at NATO headquarters last year, Trump threw rhetorical rocks at European leaders for skimping on their defense budgets and expecting the United States to pick up the tab. This is obviously not what Emmanuel Macron, Theresa May, Jens Stoltenberg, Matteo Renzi (since demoted), and foreign policy intellectuals wanted to hear.

A year later, Trump is not backing down on the defense spending issue. He has been sending letters to every European member state that remains below the 2 percent GDP target for military spending reminding them of the commitments they all made in 2014. In one such letter to the Norwegian government, Trump wrote: “It will…become increasingly difficult to justify to American citizens why some countries continue to fail to meet our shared collective security commitments.” This is diplomatic speak for “pony up or else.”

Europeans don’t like this type of talk coming from an American president. Indeed, the message sounds like a veiled threat: either spend what you promised to spend, or we, the United States, will start reassessing our central role in NATO—and maybe even pull out of the group entirely. Foreign policy scholars are genuinely perplexed about why Trump is so disdainful towards an alliance that helped the U.S. win the Cold War and stood shoulder-to-shoulder with the United States after the worst terrorist attack in history. To them, the telescope through which Trump views NATO is totally skewed.

Trump has a very poor understanding of how NATO works. He seems to believe that the alliance operates on a single collective budget and that most of that budget is picked up by the United States. In the president’s mind, the U.S. is the rich uncle who is expected to pay the bill after every family outing while everyone else either puts down a few dollars for the tip or conveniently excuses themselves to use the restroom. This, of course, is not how NATO budgeting works.

But the bottom line is that Trump is not entirely wrong—and to argue that he is making a mountain out of a molehill is excuse-making of the highest order. Without the United States, NATO would be an empty shell unable to defend European territory from the Russians or mount a credible counterattack in the event Moscow does deploy a few mechanized battalions into the Baltics (granted, an extremely unlikely scenario, but one that the RAND Corporation has studied seriously). With the exception of the British and the French, European militaries are in a pathetic state. The Bundeswehr is in shambles, with none of its submarines or transport planes ready for combat. When the independent commissioner for Germany’s armed forces concludes that the German military is “not deployable for collective defense,” and when reports surface that soldiers have to use broomsticks instead of machine guns in training exercises, Berlin has some serious structural deficiencies on its hands.

Even the U.K., one of only eight NATO members that does spend the 2 percent minimum on defense, may not be up to par. Just this week, the House of Commons Defense Select Committee released a report warning that London could lose its privileged status with the U.S. if the government fails to open the Exchequer’s spigots to the Ministry of Defense. There is a serious concern in U.K. defense circles that their joint force may not be prepared for a total war contingency—an unacceptable thought for a country proud of its status as a top-tier military power.

After two consecutive decades in which European defense spending declined, the numbers are finally beginning to go in the other direction. Since 2014, non-American contributions to NATO have increased by $87 billion. We can thank Vladimir Putin for that—and maybe Donald Trump, too.

But for this trend to continue, Washington must keep defense spending at the forefront of the NATO agenda. President Trump may wish to consider changing his tone and how he approaches the NATO budget problem, but he is well within his rights to focus on the burden-sharing imbalance next week. For Trump not to stress the point would be a dereliction of his duty. For a military alliance to depend so much on a single country is not only unfair to the American taxpayer, it’s unsustainable over the long-term.

Daniel R. DePetris is a foreign policy analyst, a columnist at Reuters, and a frequent contributor to The American Conservative.

America is stepping down as a global leader on refugees