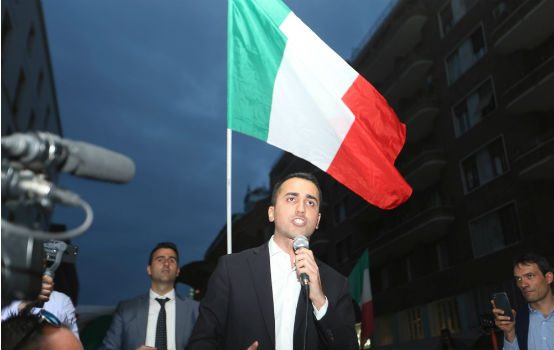 “We have the sensation of being on the eve of an earthquake,” Corriere della Sera economics writer Dario Di Vico observed on the day of Italy’s elections in early March. The results would show that some 65 percent of the electorate was opposed to the political status quo represented chiefly by the center-left Partito Democratico of Matteo Renzi and the center-right Forza Italia of long-time premier Silvio Berlusconi. Both these parties made a disastrous showing in the elections.

For millions of Italians, the status quo meant a continuation of economic stagnation, rising rates of unemployment particularly for young people, a faltering educational system, the South’s intractable social and economic problems, subservience to the European Union, and Muslim immigration. Critics charged that Renzi and Berlusconi had been given the opportunity to lead and had turned Italy into a failed state. On election day, the country affirmed that criticism. Boasts about their superior experience and knowhow became a campaign liability for leaders who had been in power for too long and who were seen as responsible for the country’s meltdown.

The steady erosion of support for the European Union figured prominently in the electoral failure of the establishment parties. Italians in politically decisive numbers view the EU as a pillar of a European status quo that’s become injurious to the peoples of Europe. Condemnations of Brussels reverberate across the Italian political landscape. That institution and the Italian centrist parties supporting it are now taking the blame for the globalization and open borders policies that have led to economic free fall and mass immigration. Italians complain bitterly about the EU, especially for having dumped on them the immigration problems of the Middle East and North Africa.

Italian voters have turned to two populist leaders to right these wrongs: Matteo Salvini of the Lega and Luigi Di Maio of the Five Star Movement. With 17.4 per cent of the vote, the Lega emerged from the election as the country’s foremost right-wing party, easily outdistancing Forza Italia and sending Berlusconi down to a humiliating defeat. Although descended from the anti-southern Lega Nord, Salvini’s new party boasts a nationalist agenda, following in some crucial respects the example of Donald Trump and promising to make Italy great again. Salvini’s “Prima gli italiani” slogan is shorthand for the party’s anti-immigrant and anti-European Union policy positions. He made headlines throughout the campaign advancing a zero-tolerance response to illegal immigrants, much to the delight of his allies and mentors on this issue, notably the French right-wing leader Marine Le Pen and Trump strategist Steve Bannon.

Luigi Di Maio’s Five Star Movement was the biggest winner of the election, with nearly 11 million votes and 32.7 percent of the total, truly stunning numbers given Italy’s complex multi-party system. Five Star more than doubled its representation in Parliament, but still fell short of the 40 percent necessary for it to rule alone. Hence for the next 90 days—a record for the formation of an Italian government—the two populist leaders alternatively threatened and cajoled each other, ever on the brink of a final rupture that would have necessitated new elections. On June 3, they finally unveiled their coalition government, which would operate under the nominal leadership of Giuseppe Conte, a law professor with no government experience. In a role deemed to be unprecedented in Italian politics, Conte is the mediator and spokesman for the two coalition leaders whose implacable rivalry had made it impossible for either one of them to be premier. Each is now a vice-premier, with Salvini serving as Minister of Interior and Di Maio as Minister of Labor.

If the Lega party has the virtue of clarity about its Marine Le Pen-like political vision, the Five Star Movement fades in and out of focus about its real intentions. Under the leadership of comedian Beppe Grillo, one of its founders and longtime public face, the Five Star Movement originated in 2009 as a left-wing populist movement essentially in the tradition of Germany’s Green Party, presenting a pro-environment and anti-globalization political and economic agenda. It also vehemently condemned America’s military interventions in the Middle East and North Africa, demanding that Italy cease to participate in them. Grillo sided wholeheartedly with Latin American radical leaders Hugo Chavez and Rafael Correa in their clashes with the United States. He traveled to Greece in support of the Syriza government in its early radical phase.

Since its storied success in the 2013 national election, the Five Star Movement has become an ideologically eclectic party. It took up anti-immigrant and anti-European Union positions generally associated with the right, while retaining its earlier allegiance to left-wing environmental and economic causes. During the campaign, Di Maio pushed the Five Star Movement sharply toward the center, constantly reassuring the financial community that he would act responsibly and the United States that its far-flung military interests in Italy would be honored. His is a now party of immiscible so-called left-wing “orthodox” and right-wing “pragmatic” elements in search of a unifying balance point. More than ideology, the Five Star Movement had centered on the charismatic personality of Grillo, but he played a minor role in the campaign and has not returned to his former prominence.

Since the formation of the Conte government in early June, the soft-spoken 31-year-old Di Maio has been eclipsed in the public eye by Salvini. The problem of Muslim immigration completely dominates public discussion in Italy today, and this is Salvini’s issue. Muslim immigration is seen as a threat to the country’s national identity and workers. More than any other, this is what propelled the Lega to its stunning advance in the 2018 election and its multiplying successes since. In the most recent political polls, the Lega has emerged as the leading party in the country, slightly ahead of the Five Star Movement. Although candidate Di Maio joined the anti-immigrant cause as well, compared to Salvini he did so in a much lower key of vocal opposition. Moreover, the Five Star Movement suffers from internal divisions on the immigration question, with leaders of the orthodox wing speaking out against an iron policy of exclusion. As interior minister, Salvini has been completely uninhibited about denouncing Muslim culture as an alien element in Italian society. He has a large and growing following, as the Lega’s soaring poll numbers and success in June’s local administrative elections show.

The signature issue of the Five Star Movement has been its call for a reddito di cittadinanza, a guaranteed income policy. For millions of out-of-work Italians living in poverty or fearing the losses of their jobs and livelihoods, this is the mainstay of Five Star’s appeal. Enormously controversial, it would require time and money before it could be enshrined into law. Protesting Muslim immigration, on the other hand, yields instant political gratification for the Lega and costs nothing. Thus far, there has been no sign of a legislative proposal from the Conte government for the guaranteed income policy.

Though they’ve slipped a few points in recent polls and came in behind the Lega in June’s administrative elections, the Five Star Movement is still a powerful if inchoate force in Italian politics. Economic circumstances will most likely determine how the jumble of elements in the party sort themselves out. The hardcore anti-globalists in the orthodox wing have described the European establishment as a vampire-like regime of banks and corporations. Not much was heard from them during the Di Maio-led campaign, but they continue in existence and could come to the fore if Italy’s very modest recent economic gains disappear like a mirage into the limitless wasteland predicted by the prophets of disaster capitalism.

Confindustria, the main association representing manufacturing and service companies in Italy, grimly forecast in late June that economic growth would shrink from 1.5 percent in 2017 to 1.3 percent in 2018, and to 1.1 per cent in 2019. This news sent a tremor throughout Italy. The earthquake that Di Vico warned about could involve even more far-reaching effects than a reconfiguration of Italy’s political landscape.

Richard Drake, a historian of Europe and the United States, is professor of history at the University of Montana.

Why 2 RedState writers quit over “the allure of Trumpism”