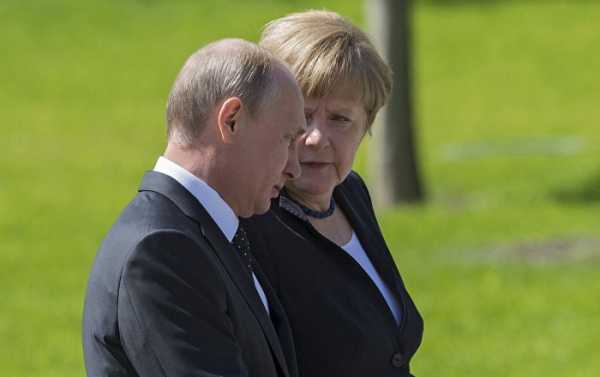 According to a statement, issued after the talks between Russian President Vladimir Putin and German Chancellor Angela Merkel, both countries have agreed to resume a political process on Syria, including the discussion within the Geneva and Astana platforms.

The latest airstrike by the US, the UK and France on Syria is an act of aggression and the violation of the international law, Vladimir Putin said during talks with Angela Merkel.

“The Russian President once again stressed that the actions of a group of Western countries that committed an act of aggression against the Syrian Arab Republic grossly violated the norms of international law, including the UN Charter, and caused significant damage to the process of peaceful settlement of the Syrian crisis,” the statement reads.

The press service added that Putin and Merkel had emphasized the importance of conducting a thorough and unbiased investigation by the Organisation for the Prohibition of Chemical Weapons (OPCW) mission in Syria.

“Both sides expressed readiness to facilitate the resumption of political and diplomatic efforts on the Syrian dossier, including in the Geneva and Astana format, and to continue bilateral contacts on this matter,” the press release read.

At the same time, German Chancellor Angela Merkel said that Russia, being Syria’s ally, shares responsibility for the country’s actions.

Last Saturday, the United States, France, and the United Kingdom launched strikes on a number of targets in Syria in response to an alleged chemical attack in the Damascus suburb of Douma.

According to the Russian Defense Ministry, the three countries fired over 100 cruise and air-to-surface missiles, most of which were shot down by Syrian air defenses.

The attack came the same day that the Organization for the Prohibition of Chemical Weapons (OPCW) mission was set to start the probe into the alleged chemical weapons attack in Douma, which the West had immediately blamed on Damascus.

Following the accusations, the Syrian government has strongly denied being behind the alleged attack and stated that the missile strike was “brutal aggression.”

More and more House Republicans are deciding they want no part...

Review: The Pseudo-Mysterious Seriousness of “Annihilation” |

Normani and the Work of the Pop Princess |