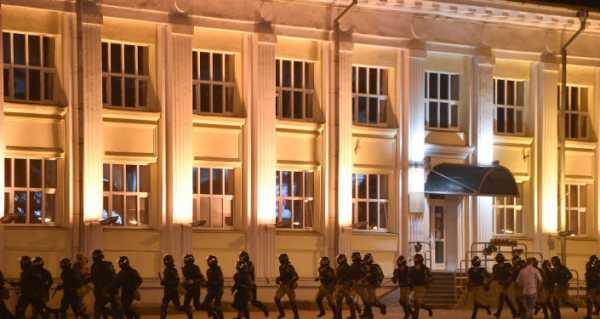 Heavy blasts have been heard in central Minsk, a Sputnik correspondent said on late Sunday. A cloud of smoke then emerged at the intersection of Masherov Avenue and Storozhevskaya Street.

It was reported that police used tear gas and smoke grenades to disperse protesters in central Minsk. They also used two water cannon vehicles, from time to time, to disperse the crowd.

The riot police have managed to drive thousands of demonstrators out of Victors Avenue, where a protest emerged soon after the voting in the presidential election ended on Sunday evening. The crowd then relocated to Masherov Avenue.

Clashes have been reported between protesters and the riot police working at the site. The authorities have not yet confirmed any injuries, but ambulances were earlier sent to the scene of the protest.

Incumbent President Lukashenko is set to a sixth term after early results of Sunday’s election showed him lead the polls with a comfortable majority. According to the election watchdog chief, Lukashenko is winning in all regions that have reported voting data.

Did Brett Kavanaugh perjure himself during his confirmation hearing?