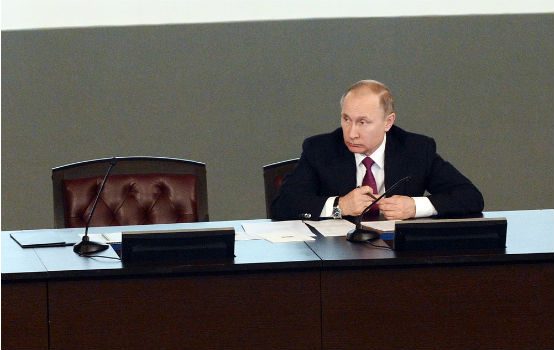 Any assessment of Vladimir Putin’s Russia needs to stipulate that: 1) he is a corrupt dictator sitting on top of a rotten kleptocracy; 2) political freedom and democracy in Russia are imperiled; 3) the human rights situation in Russia is not good, with political opponents of the regime subject to routine harassment, arrest, and in a few cases political violence; 4) Russia under Putin has been willing to use various instruments of coercive diplomacy, from outright military force (Georgia and Ukraine) to wielding cyber and propaganda weapons (Estonia, Ukraine, and the United States).

But even with these stipulations, there remains a yawning gap between the apocalyptic rhetoric about the Russian threat and the reality of the domestic regime and foreign policy behavior of contemporary Russia. Moreover, many of the recommendations that those hyping this threat bruit about are in fact precisely the sorts of steps that strangled the baby of Russian democracy in its cradle and today threaten to turn an increasingly frosty peace into a hot war.

Consider the domestic political situation in Moscow. It is true that Russia has become an oligarchy dominated by President Vladimir Putin and bolstered by his former security service colleagues and nouveau riche crony capitalists. Political participation is constricted and opponents of the regime are regularly harassed, sometimes jailed, and on occasion killed. On the other hand, Russia is no longer the totalitarian state that the Soviet Union was under Josef Stalin. Communism killed millions during the Soviet period; lethal political violence in Putin’s Russia is deplorable but relatively rare, the murders of a few journalists, political opponents, and defectors notwithstanding.

And while political association in Russia is increasingly constrained, other forms of association remain vibrant. Two examples, one profane, one sacred. As the recent World Cup demonstrated, social freedom, for Russians and foreigners, remains vibrant. And while one would hardly call Russia religiously ecumenical, the role of the Orthodox Church in Russian society has grown dramatically.

Russia has employed military force against its neighbors twice in recent years. In 2008, it fought a short but sharp war against the former soviet republic of Georgia, and in 2014 it seized the Crimean Peninsula in a largely bloodless occupation and then ratcheted up a proxy rebellion of pro-Russia separatists in the Donetsk region of Eastern Ukraine.

Two points to keep in mind here: first, in both cases, Russian moves were not unprovoked bolts from the blue. Rather, they were responses—albeit excessive and illegal—to efforts by NATO and the European Union to draw former Soviet republics further into the West’s orbit. Second, Russian aims were limited and showed little indication of being the first shots in a longer campaign to recreate the Soviet Union or the Warsaw Pact, whether by blood, iron, or electrons.

For many Americans, U.S.-Russian history begins in 2014 with the Ukraine crisis and reaches its nadir in 2016 with Russian meddling in our presidential election. But Russians have an alternative chronology of the conflict. It begins in 1990 with discussions between the George H.W. Bush administration and the last Soviet leader Mikhail Gorbachev over the unification of Germany after the fall of the Berlin Wall. Gorbachev believed, and recent historiography confirms, that he received verbal promises that if there was a unified Germany, NATO would not expand. Yet despite a decade of warnings from Russian democrats against doing so, starting in 1999, the first of five waves of NATO expansion rolled through. Vladimir Putin rode a counter-wave of anti-Western nationalism to power in Moscow. The Russian narrative continues by highlighting Western support for the various pro-Western Color Revolutions in the former Soviet republics.

From Moscow’s perspective, the events in Kiev in late 2013 and 2014, in which the pro-Russian but democratically elected President Viktor Yanukovych was ousted before the next round of elections, looked suspiciously like a Western-backed coup. The fact that a U.S. State Department official, Victoria Nuland, was cheering the Maidan rebellion on from the streets (while serving tea and cookies) certainly smacks of American election meddling.

Putin’s fraught relationship with Barack Obama’s ambassador to Russia, Michael McFaul, was not helped by the American envoy’s relationship with members of the political opposition in Moscow. Putin critics in America would distinguish between wishing democratic reformers well (what we do) and trying to influence a democratic election process (what the Russians do), but those outside the United States who recall numerous instances of American meddling in elections and overthrowing democratically elected governments no doubt wish a pox on both our houses.

Neoconservative pundit Max Boot’s recent Washington Post column notwithstanding, there is no solid evidence that Russian cyber vandalism actually mattered in terms of the outcome of the election. If it did matter, it did so simply by revealing the ugly truth that the Wikileaks emails were not fake news but rather a raw and unfiltered peek into the Democratic National Committee’s Tammany Hall efforts to put a thumb on the primary scale in favor of Hillary Clinton, as Putin snarkily pointed out in Helsinki.

But let’s assume for the sake of argument that Putin’s motives are as malign as Russia hawks on both sides of the American political aisle fear. How much of a threat is the angry Bear today?

The Russian Army’s performance in Crimea in 2014 was an improvement over the ugly win over Georgia in 2008. That assessment, though, is damning with faint praise. True, Russian troops were well-equipped, disciplined, and not obviously drunk, but they also faced no organized armed resistance and were operating in an area where the majority of the population supported them.

More importantly, Crimea hardly constitutes evidence that Russian forces would be eager to take on states with more hostile populations (the Baltic States and Poland, for example). It is one thing to prod neighbors by using denial of service attacks or aiding local separatists; it is quite another to risk yet another defeat by a small but determined neighbor such as what the much more powerful Soviet Union suffered in the Russo-Polish and Russo-Finnish wars.

The recent kerfuffle at the NATO summit about allied burden sharing and President Trump’s recurrent ruminations on our alliances’ relevance have Atlanticists hyperventilating about the threat from a resurgent and revanchist Russia, especially if the United States no longer has Europe’s back. That, of course, assumes that in an earlier era, Washington really was willing to trade Chicago for Bonn. More importantly, today, when you look at the most important indices of latent and actual military power, NATO even without Uncle Sam’s muscle is hardly outgunned. Indeed, it has advantages in population (more than four to one), GDP (14 to one), defense spending (more than five to one), tanks (more than two to one), warships (four to one), and combat aircraft (two to one).

The only category in which the Europeans are at a disadvantage vis-à-vis the Russians is nuclear weapons (.11 to one). But recent scholarship has shown that even a large advantage in nukes does not translate into coercive leverage. For example, just a handful of Soviet nuclear weapons during the Cuban Missile Crisis offset massive U.S. nuclear superiority and led President Kennedy to try to end the crisis through diplomacy rather than combat.

President Putin’s recent press conference in which he revealed—mostly through animations and simulations—a new generation of Russian nuclear weapons garnered much breathless press attention. What was lost in the media chatter is the fact that the United States’ Cold War legacy nuclear arsenal is capable in the eyes of many analysts of executing a splendid first strike against Russia’s decrepit strategic force. I would not go as far as these analysts who suggest we “wouldn’t get our hair mussed” in “nuclear combat toe-to-toe with the Russkies,” but their assessment does highlight how much the nuclear imbalance favors the West. Keep in mind, too, that President Obama announced a $1 trillion nuclear modernization program to maintain our advantage before Putin did.

Despite President Trump’s chummy summit with Putin in Helsinki, something is rotten in the Kremlin. The West is right to regard Putin’s Russia as a strategic problem to be managed. But we should not lose sight of the fact that even the authoritarian regime occupying the Kremlin today is a far cry from the totalitarian and mass-murderous governments of the Soviet period. Moreover, while Russian behavior in recent years hardly merits the Nobel Peace Prize, it is also not surprising given Western actions and the dynamics of great power politics. Finally, NATO Europe, even without direct American participation, is fully capable of defending itself against a bumptious but much diminished Russian Bear.