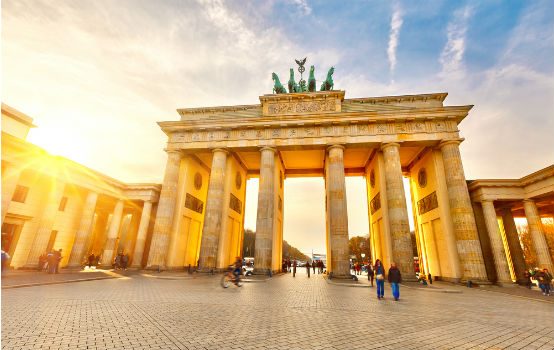 Even after the fall of the Berlin Wall, the idea of an immediate reunified Germany seemed remote. Margaret Thatcher, mindful of recent history and her own childhood memories of World War II, was a vocal skeptic. Her French counterpart, François Mitterrand, was even less enthusiastic and predicted, “I don’t have to do anything to stop it, the Soviets will do it for me. They will never allow this greater Germany just opposite them.” Helmut Kohl’s cautious five-year plan for reunification, presented to the West German Bundestag in November 1989, was partly aimed at reassuring nervous neighbors and allies.

History, however, outpaced expectations, and rapid German reunification is now viewed as one of the signature accomplishments of the post-Cold War era. Grim predictions of a newly reunified Germany dominating the European continent seem almost hysterical in retrospect, a product of an older generation’s narrow fixation on bygone history. Recent headlines about the country’s sad state of military readiness suggest that German belligerence truly is a thing of the past. A shift in the global center of gravity towards the Far East, coupled with Europe’s own troubled internal politics, have done little to dispel this impression.

Is a great power still a great power if nobody notices? Predictions about America’s relative decline and a new era of multipolarity often focus on regional challengers like Iran and Russia or China’s inexorable rise. Few seem to notice (or care) that the fourth largest economy in the world has slowly reasserted itself as Europe’s de facto leader.

Germany’s economic clout is a European fact of life, but unlike previous eras, this hasn’t translated to an assertive military or foreign policy presence. When the United Kingdom and France bombed Syria, Germany’s contribution was limited to a tepid rhetorical endorsement. German politicians are certainly less enamored with expensive weapons systems than their French and British counterparts. However, no economic power can avoid wielding substantial regional influence, a reality that still inspires a degree of pan-European unease. To borrow a popular Czechoslovakian joke about German investment from the early 1990s: “I have some good news and some bad news about Czechoslovakia’s post-Communist prospects.” “What’s the good news?” “The Germans are coming!” “And the bad news?” “The Germans are coming.”

Will economic clout eventually translate to foreign policy assertiveness? In some ways, it already has. France and Britain may tout their military capabilities as evidence of their continued great power relevance, but Angela Merkel’s unilateral decision to welcome millions of North African and Middle Eastern migrants is far more consequential for Europe’s future than lobbing a few missiles at Assad. The impact of Eurozone monetary policy on the continent’s southern periphery is another product of German influence. Conscious of its own disastrous historical experience with hyperinflation, Germany insisted that the European Central Bank adopt its tight-money preferences, effectively foreclosing policies that might have done more to alleviate the Great Recession in Spain, Greece, and Italy.

Historians often emphasize the role of institutions when explaining periods of sustained peace in European history. The long era of stability following Napoleon’s final exile is attributed to the Congress of Vienna’s brilliant diplomats. NATO and the web of institutions undergirding the Western alliance get the bulk of the credit for suppressing German revanchism after World War II. Institutions matter, but there is a more prosaic explanation for Germany’s recent quiescence. The memory of a devastating world war, coupled with the threat of an external enemy, froze European great power competition for two generations. The Soviet Union is long gone, the United States is clumsily pivoting to Asia, and memories of World War II are fading. Would a revival of German leadership really surprise under such circumstances?

Indeed, there are signs that German national feeling is beginning to reemerge after a long period of dormancy. Some indicators, such as Germans’ newfound willingness to display their flag during World Cup matches, are benign and unremarkable. Others, such as a conservative leader’s recent comment that the Holocaust is a “speck” on Germany’s long and glorious history, are perhaps more troubling. It is notable that observers well schooled in Europe’s history of great power conflict were wary of a unified Germany even before the end of the Cold War. Wrote the prominent English historian A.J.P. Taylor, “If Anglo-American policy were successful and Russia compelled to withdraw behind her frontiers, the result would not be national liberation; it would be the restoration of German hegemony, at first economic and later military.”

In the salad days of the 1990s, French and British concerns about reunification seemed outdated and alarmist. Perhaps Thatcher and Mitterrand weren’t wrong, merely premature. Now that the glow of post-Cold War optimism has faded and fissures have reemerged within the Western Alliance, why wouldn’t Germany demand a geopolitical role commensurate with its economic status?

A newly assertive Germany does not mean the return of a Nazi- or even Wilhelmine-era foreign policy. Traditional spurs to German expansionism no longer exist. Large communities of ethnic Germans outside the country’s national borders (the so-called Volksdeutsche) disappeared after World War II, and it’s doubtful that demands to recover East Prussia or Alsace-Lorraine for the fatherland would appeal to Germany’s aging electorate or its technocratic leadership class. Besides, why resort to crude political or military pressure when such areas are already accessible to German capital and amenable to German influence through the mechanisms of the European Union?

Instead, the return of German hegemony on the European continent will be subtle, incremental, and largely benign. Germany’s economic clout is already masked by the European Union, and there is ample scope to expand this influence through pre-existing “multilateral” institutions. To take just one example, Germany supplies a disproportionate share of the European Union’s internal aid budget, an important source of revenue for its poorer Eastern European members. Hungary and Poland have been vocal critics of German immigration policy, but they might change their tune if the EU starts withholding critical infrastructure funding. Indeed, the anti-German posturing of the Visegrád Group is more than a little reminiscent of the Little Entente, an interwar alliance of smaller Eastern European states that was also supposed to constrain German ambitions.

The EU will almost certainly survive, if only through sheer bureaucratic inertia, but the ongoing populist backlash has exposed the limits of a pan-European identity. Instead, we should expect the continued emergence of an independent “European” foreign policy, increasingly shaped by German preferences and often at odds with American priorities. Like the expansion of Germany’s economic influence, this process has already been underway for some time. Disagreement over the Iraq war and German distaste for Donald Trump are obvious points of tension, but these are less isolated fissures than signs of a gradually widening divide. American annoyance with Germany’s limited NATO contributions predates Trump, as do disagreements on a variety of consequential issues, from the proposed Nord Stream 2 pipeline to the response to Russian aggression in Ukraine. A more amicable relationship between American and German heads of state might take these disagreements off the front page, but they won’t restore the Cold War-era unity of purpose.

The latest German bid for European leadership will almost certainly be less traumatic than in earlier eras. Cloaked in and to some extent constrained by the EU’s institutional framework, Germany is no longer poised to violently upend the status quo. Instead, it will be one important power among many in a world that no longer revolves around Europe. In the constellation of American foreign policy relationships, Germany may come to resemble a country like India or Brazil: not overtly hostile, inclined to amicability by shared political traditions, and willing to cooperate on areas of mutual interest without slavishly adhering to Washington’s dictates. Considering Germany’s troubled history, this isn’t the worst outcome imaginable.

Will Collins is an English teacher who lives and works in Eger, Hungary.

The West Virginia teachers strike is over. But Oklahoma and Arizona...

Gas Explosion in Iranian Capital of Tehran Injures At Least 1...